Superman Wonder Woman is a title that I have just jumped on board with since DC’s Convergence event has wrapped up. I read the first few issues when the title launched but was not hooked, but since it has come back with issue # 18 I have been on board. This issue did not disappoint. 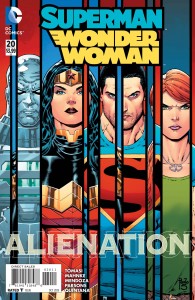 This story continues the new arc named “Dark Truth” which deals with the fallout of Superman’s identity being released by the Daily Planet, it features old villains that have resurfaced as well as Wonder Woman’s crusade to find the people from Clark’s life that have been ripped away seemingly by the Government.

I really like what Peter J Tomasi is doing with the new iterations of Superman & Wonder Woman, I was a big fan of his run on Batman & Robin and have grown to love his work, the Doug Mahnke art as always is amazing and appears to draw the characters of the page in a way I have come to enjoy with this title. The story has managed to keep me on the edge of my seat and I really do look forward to reading this title every month.

A great issue from Tomasi and Mahnke, cannot wait for the next issue, this is my favourite Wonder Woman title on the stands at the moment.

SUPERMAN WONDER WOMAN # 20 is out now from DC Comics