Now this was a real treat for me. Batman is by far my favourite character in all of comics and I have been a fan since I started reading comics at a very young age, so to review the latest issue of Batman was truly a pleasure. 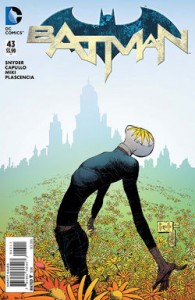 This continues the new arc that started in Batman # 41 with a new Batman and also a new villain called Mr Bloom. It deals with the struggles that the new Batman is having, and shows the team doing everything they can to help him fight the new evil on the street. There is also some standout Alfred moments in which he relays what actually happened to Bruce Wayne after the events of End Game.

Scott Snyder has the uncanny ability to create these new situations and villains throughout his run on the book, which makes it by far the first book I go to on the week of its release. He has the uncanny ability, alongside of Greg Capullo’s amazing art, to draw me into the story and to keep me there along for the ride. That is the reason I will read anything Scott Snyder writes.

A stellar release that we have come to expect and a must read for any Batman or comics fan in general.

BATMAN #43 is out now from DC Comics