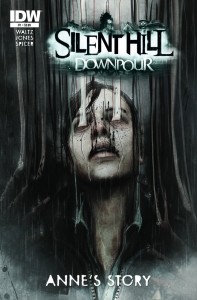 I went in with little to no expectations and came out a little disappointed. Perhaps this book was made solely for die hard fans (which I suspect many licensed property titles are), but even as a casual fan, familiar with the themes and styles of the Silent Hill world, I felt the comic just wasn’t a good comic book.

There were things about the book that immediately grabbed my attention and piqued my interest. The two covers and the interior art are very good. Artist Tristan “T-Rex” Jones and colorist Michael Spicer created a dark, cramped, oppressive, nightmarish world. Perfect for Silent Hill and perfect for a horror comic. What missed the mark for me was the writing.

Written by Tom Waltz, a co-author of the Silent Hill Downpour game and IDW editor, Anne’s Story promises to tell the story of a character that wasn’t told in the video game. After a brief recap of the Silent Hill Downpour video game and a confusing single page showing Anne’s memories of events leading up to the story, Waltz seems to rush the reader as deep as possible into the Silent Hill world that fans love. The problem is there is no build up. The writing might be perfect for a video game, but it does not translate well into the comic form. There is no pacing. The scares come to quick and fall flat. The visuals are definitely creepy, don’t get me wrong, but the story, so far, does not make for a entertaining comic reading experience. Even the dialogue feels too “on the nose,” which kills all suspense and mystery for me.

Pass (unless you’re a die hard Silent Hill fan) — Perhaps Silent Hill Downpour: Anne’s Story is better suited for an animated movie. In comic form, it’s weak. If you’re not already familiar with the Downpour story, you’re going to have a hard time feeling anything for Anne, the main character, and quite frankly, you won’t know what the hell is going on. Even with some very creepy looking creatures and scenes, Silent Hill Downpour: Anne’s Story #1, fails to engage.