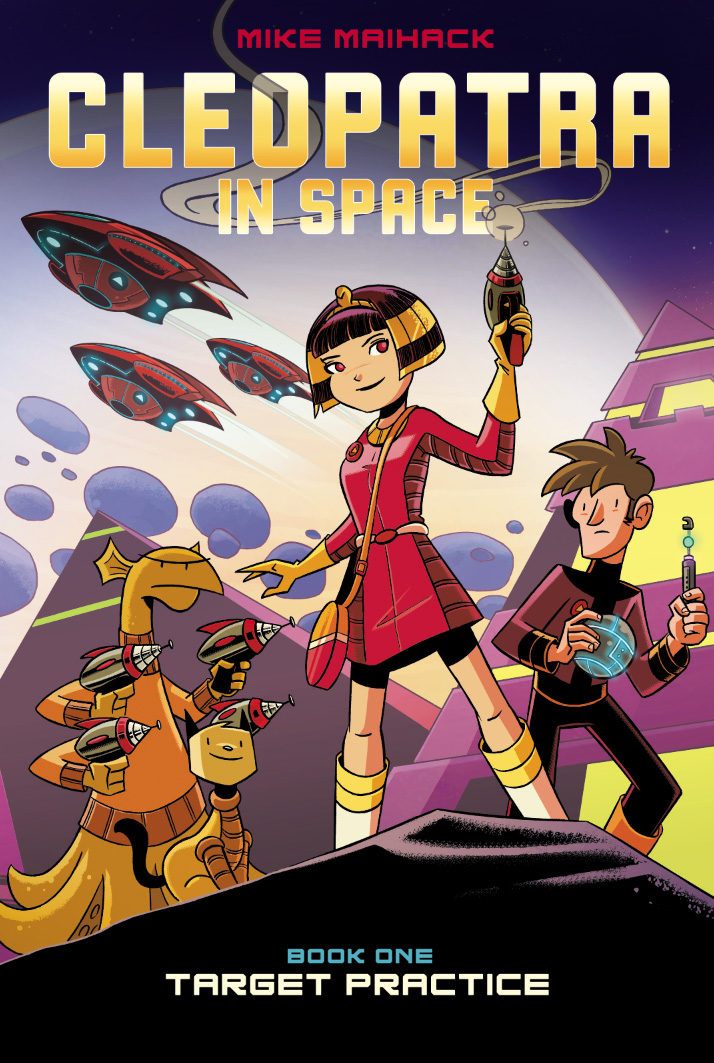 Cleopatra in Space in the first volume collecting an original Mike Maihack story based on his web comic of the same name that is being published by Scholastic. As you might have deduced, with the Scholastic name attached to it, Cleopatra in Space is an all-ages book revolving around the tales of the Cleopatra we know from history with a little twist. Gone is the beautiful Queen of the Nile and instead we meet a rambunctious 15-year girl who wants to skip lessons and shoot slingshots with her friends. Cleopatra accidentally stumbles onto something that changes the course of her life as she knows it and this is where the story of Cleopatra in Space really begins.

This story is one of the most delightful books that I’ve read. Maihack is responsible for another wonderful story that I’m very familiar with and that’s his Batgirl & Supergirl web comic that features the two DC characters on fun adventures with one another. Cleopatra in Space is in the same boat as that comic but is its own thing entirely.

Maihack’s art style is a mix of newspaper strip cartoon and a chibi anime but he turns it into something original and fresh. His colour palettes are bold, but simple and everything looks effortless. His work incorporates those colours along with crisp, clean lines in some places while just using shading and colours to do the outlines in other places. Cleo, as she likes to be called, sports a modern space girl outfit that’s original and yet still works with the character leaving her still very identifiable.

The writing very much suits the images that go along with it. Maihack’s story is fresh and fun and it totally involves lots and lots of cats (seriously, they’re everywhere!). He writes Cleo exactly like she is, a 15-year old girl with the curiosity of a cat except when it comes to learning stuff like algebra. Her character is strong, fun and sassy but she also has flaws and Maihack makes sure to build the story around them to help us enjoy Cleo’s journey even more.

VERDICT
Buy it. Everything about Cleopatra in Space is wonderful. Mike Maihack writes, draws, colours and letters this series and it shows that it’s a true passion project for him that’s finally being recognized through this publication.

This book is a great all-ages tale that I think girls will especially flock to. In a time when (finally) more and more female characters are popping up as leads in books and comics, it’s up to us to steer a new generation towards the ones that set a good example and become good role models. It’s clear that Maihack wrote this as an all-ages series and it reads like that, but I think the ages that will get the most of this are about 7-14. Not that anyone outside that bracket wouldn’t get it, but for that bracket in particular, this book and series has the potential to be something along the lines of Ender’s Game, Narnia, Harry Potter and other fantastical works that inspire and motivate the pursuit of creativity and other such things.

NOTE: Mike Maihack is a really talented illustrated and is also responsible for amazing things like Catvengers and Catastic Four, a couple prints that I have up in my home, so if that’s up your alley, make sure to check out his web site for all of that.