I’m not impressed with All-New Marvel Now. I mean, I get it: you throw enough stuff at the wall and something is going to stick, right? But, from what I’ve read, there is more fall flat than stick. Unfortunately, New Warriors #1 falls flat. I’ve seen this coming for a while in the pages of Nova, but I hoped that the issue itself would somehow surpass my expectations. I wanted it to, but it just didn’t happen. 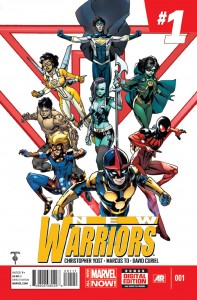 First issues of team books that aren’t Avengers or Justice League seem to have a formula: You introduce the members of the team in their natural habitat–performing their particular skill set–one by one, a major threat is introduced, the team members start to coalesce, end on a cliffhanger, and BAM–issue over. In all of that, the goal should be to hook readers either through the characters themselves, the situation they are in, the threat they must face, or all of the above. New Warriors goes through all of the proper motions–hits all of the right points–but just fails to set the hook. Other than Nova, I’m not really familiar with any of these characters, but I’ve read books with that same problem that still managed to succeed. I will say that, unlike some other All-New Marvel Now books, nothing in New Warriors was overtly bad. I just couldn’t find anything in this issue to compel me to buy the next one. The characters weren’t interesting enough, the threat wasn’t scary enough, and the cliffhanger just wasn’t shocking enough to really keep me engaged.

The art in New Warriors is the best part of the book, but not enough to save it from mediocrity. Marcus To’s figures are distinct, his layouts dynamic, and his characters expressive. David Curiel’s colors are bright and playful while slipping in some flashy effects and drama. If Marvel has a “house style” right now, this is a great example of it. Unfortunately, it just doesn’t add up to a spot on my pull list.

Skip it. If you’re looking for young superheroes showing off their powers, go back and pick up Gillen and Mckelvie’s Young Avengers in trade. If you want a fun superhero book that relates to the New Warriors, pick up Nova from Duggan and Medina. The point is, there are other books out there that are doing what New Warriors is attempting, and do it a lot better. There is a moment in the pages of Nova #100— a special issue released in November of last year–where Sam Alexander, the 15-year old Nova, consults The Watcher about why he should join the New Warriors when he’s been offered a place with The Avengers. Uatu, communicating through images and video, tells Sam that it’s better to be the big fish in a small pond than the other way around. Now that I’ve read New Warriors, I agree that Sam is the big fish in this pond. But, I’ve also learned that you can’t always trust a Watcher to give good advice.