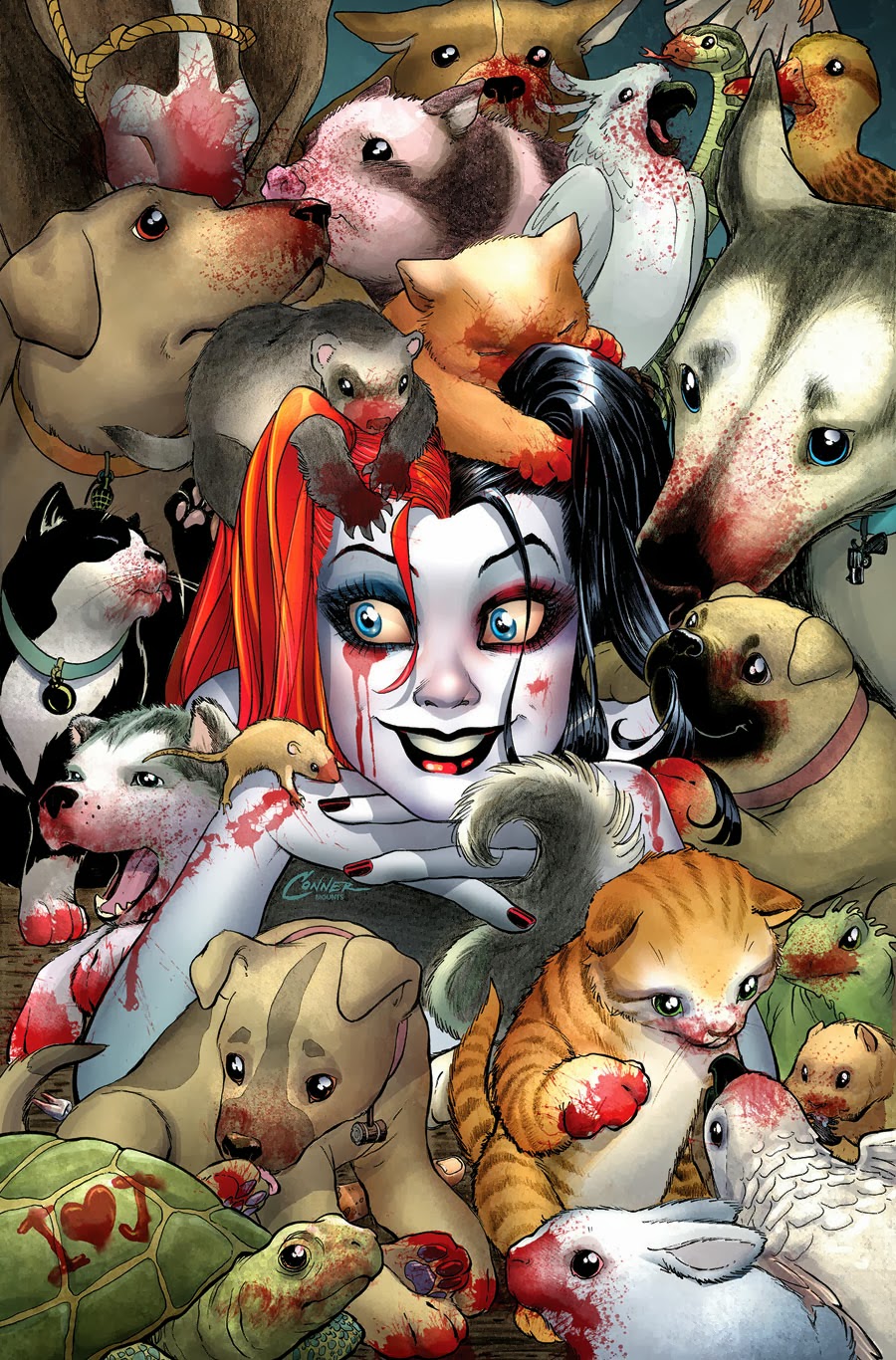 “How could I not choose this cover? Anyone who knows me or listens to the Talking Comics podcast knows what a HUGE Harley fan I am, and by extension knows what a nut I am for fluffy animals. I don’t even care if their paws and snouts and what have you are covered in blood. I will hug, and cradle, and smoosh them all into little bitty pieces!” – Steve Seigh

“Initially, I was all “A-w-w-w-w-w!”about this Amanda Conner cover, until I noticed the rather red snouts and paws of the puppies and kitties! Let’s hope that it’s strawberry jam, or Harley’s rouge, and not that other stuff!” – Bob Reyer

” Damn Harley, you crazy!  It took me a second to realize what was all over the paws, claws, muzzles, and beaks of the critters surrounding Ms. Quinn, and once I did my skin crawled ever so slightly.  First cover I can remember in a while that’s elicited both an “awww” and “ewww” from my gaping mouth-hole.” – Patrick Brennan

“I love how horrid and painful this cover is. Though I have never broken a bone before in my life (though I probably just jinxed myself) I could only imagine the agonizing pain that Bruce is enduring on this cover. I’ve been staring at this cover for months inside of Previews magazine and now, finally, I have my very own copy of it to unnerve me anytime I like. Score!” – Steve Seigh

“Greg Capullo has been hitting it out of the park with his Doctor Death work in the last couple of issues of Batman, giving us a heaping helping of nightmarish monster mania.  This cover just might be one of my favorites of his on this title; it tickles my morbid little mind in just the right places.” – Patrick Brennan

“Just like the final issue of Fantastic Four, the gang’s all here on this cover as well! Though it’s sad to see this wonderful series come to an end, I’m overjoyed at the feeling of togetherness that this cover represents. It’s been a brief but amazing run, FF. You will be missed.” – Steve Seigh

“Sadly, the Matt Fraction runs on FF and Fantastic Four come to a close with this issue, though not without this “fond farewell” of a cover by Michael and Laura Allred!” – Bob Reyer

“I would let Black Widow kick my ass any day of the week.” – Steve Seigh

“Love, love, love this cover. I’m not even sure that I can pinpoint why, but it’s got to have something to do with the scope of it and the beautiful colors used to put it all together.” – Steve Seigh

Art and Cover by Emma Rios “Another stupendous wrap-around cover by the amazing Emma Rios! Issue after issue, Ms. Rios is building a case to be my “Best Artist” nominee for next year’s awards! Simply stunning!” – Bob Reyer 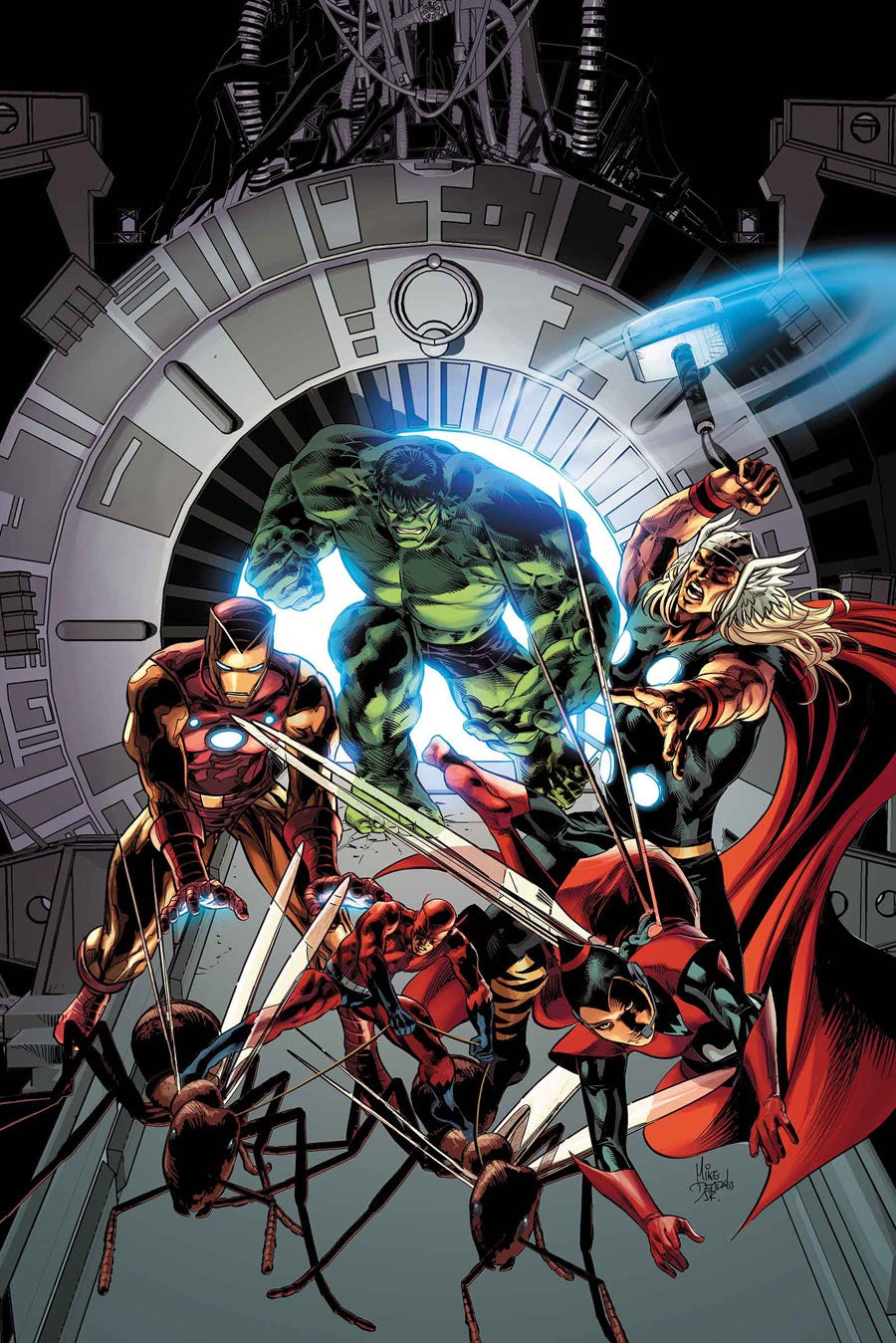 “It’s great to see the original Avengers back together! Why they’re on the cover (or in this issue, for that matter!), may take Jonathan Hickman three years to explain, but count me in!” – Bob Reyer

“It seems as if Luke Cage has had just about enough of Otto’s “superior” attitude about his leadership, not to mention being snarky to his missus!!” – Bob Reyer

This list was compiled while listening to the album Cursing the Sea by the band September Girls.