There are a lot of factors that go into making an awesome installment of a comic series.  The story must be engaging, the dialogue snappy, and the art eye-grabbing, just to name a few.  But sometimes the greatness of an issue can funnel down to one single point that practically renders the other moments in the book trivial.  This is undeniably the case in Wonder Woman #27, for in this issue we find our favorite Amazon entering a battle of strength and skill with a particularly deadly woodland creature, one that has inhabited the darkest corners of our minds and our most frightening nightmares since the dawn of time.  In Wonder Woman #27, Diana wrestles a talking bear. 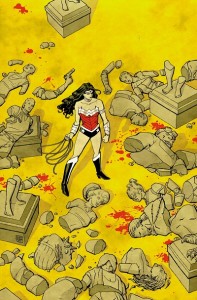 Alright, so technically it’s Artemis (goddess of the hunt) taking the form of a bear, but it’s still hands-down the best part of this issue.  Which is saying something, because Wonder Woman #27 is a damn good comic, filled with the solid blend of action and drama that we’ve come to expect from this title.  In it we find a downtrodden Diana returning to her former home with Hermes in an attempt to figure out what her next move should be after discovering that Zola has run away.  Meanwhile, Apollo continues his torture-a-thon of the First Son, offering to end his pain if he devotes his services to the Sun god.  Will this villain-turned-victim accept his offer, or is there a heavy pile of whoop-ass heading Apollo’s way?

What really makes this issue work are the quieter moments between Diana and her friends.  There’s a vulnerability to her here that we haven’t seen much of before that adds a new, refreshing level to her character.  “I’ve failed someone I care the world about,” she confesses to the shell that’s left of her mother, revealing a human side that is very relatable.  But then we see that steely conviction return and are reminded why this character is such a badass: she can come to terms with her mistakes and do what needs to be done to make them right.

Buy It – Sporting some awesome character development, swift plot progression, and a bear fight to boot, Wonder Woman #27 shows why it’s one of DC’s best books right now.  Get out there and throw your cabbage at it, folks!