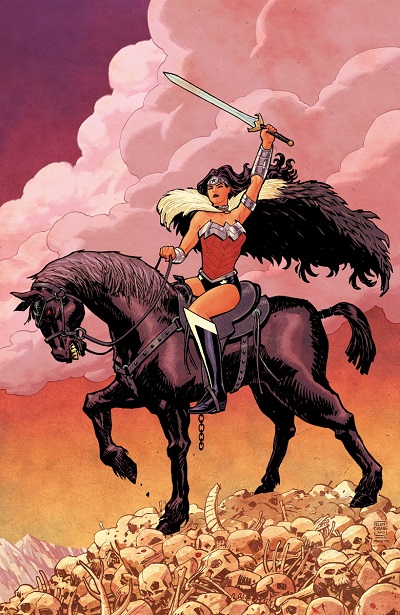 NOTE: A rather sizable spoiler from issue #23 can be found here.  Sorry!

One could definitely argue that this issue of Wonder Woman potentially had some forces working against it.  “Villain’s Month,” for starters, has proven to be a bit of a life-sucker for some titles, leaving them struggling to regain some of the momentum lost during the month long break.  However, the main question on my mind when picking up this book was how was Brian Azzarello going to follow up issue #23, arguably the best installment in his entire (already stellar) run?  Well fans, we needn’t worry our pretty little heads: while Wonder Woman #24 isn’t quite as heavy a hitter as the one previous, Azzarello still brings the goods.

This issue finds Diana and her ragtag family house hunting as they attempt to deal with the aftermath of their recent encounter with the First Son.  This is cut short, however, when Wonder Woman is summoned to Olympus against her will and informed by Apollo that it is now her duty to fill the seat of her fallen uncle, the god of war.  Meanwhile, Cassandra resurfaces and puts into motion her own mysterious, and no doubt devious, plans.

From the beginning of this series, Brian Azzarello has made this story more than just a superhero romp.  The characters in Wonder Woman are fleshed out and three-dimensional, engraining themselves in our imaginations, which makes the sadder moments in this installment actually hit their mark.

Perhaps more impressive, though, is how most of the villains in this series don’t feel all that villainous.  Sympathetic baddies can be found in many stories these days, but what makes many of Wonder Woman’s standout is that they are just people making bad decisions with the best of intentions.  Well, mostly.  Apollo’s still a douchebag, of course.

Goran Sudžuka, of Ghosted-fame, does well in this issue as he fills in for series regular Cliff Chiang.  As seen before, his art style fits the tone and look of Wonder Woman nicely, thankfully avoiding the issue of that jarring feeling that comes sometimes with interim artists.

Buy It – Everyone’s favorite kickass Amazon is back, and that’s cause for some fist-pumps!  If you haven’t been reading this series, you’re doing yourself a disservice because Mr. Azzarello and company are killing it.