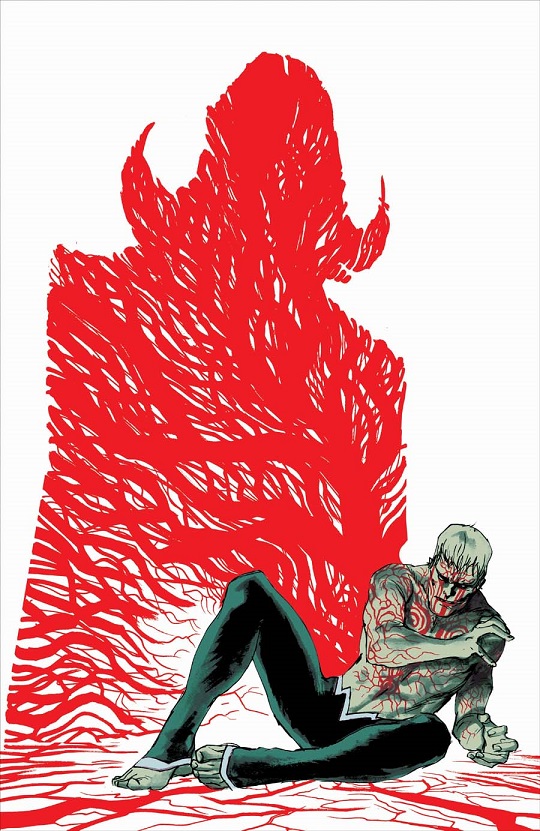 I was absolutely floored this week by the first part of “Hollywood Babylon,” the newest story kicking off in Animal Man #24. Admittedly, I was on the verge of dropping the book for financial reasons, not for any particular issues in quality, but more from atrophied interests after a two month wait between books (ahem, Villains Month). Issue #24 has not only re-sparked my interest in the series, but has moved the book back up near the top of my “too read pile.”

First off, Rafael Alburquerque on art deserves several fist pumps in the air. He’s brought his own style to the book, but kept some of the elements of both Travel Foreman and Steve Pugh before him. There is a change in style, but it is not a drastic one that might startle those readers who pay no mind to the names on the cover (shame on you!).

The ease in transition should also be credited to colorist Dave McCaig. When we visit the Red we see those familiar warm, magenta tones often accompanying Little Wing. Darker, bolder tones of crimson and vermilion are used in the scenes with the Parliament and Brother Blood; it presents a stark contrast between these two avatars of the Red.

Not only is the art amazing, but Lemire is on top form. There is a balance among the wafts of humor, death and destruction, and heartstring tugging. Even in all of the misfortunes brought upon the Baker family, there is still a glimmer of hope. Lemire has brought the idea of family and togetherness back to the forefront of Animal Man. It is one of the things that made this book so damn good when it launched. In the face of terrible circumstances our characters are forced to embrace acceptance and trust in those close to them.

So much s*** goes down this issue that it is amazing. Brother Blood is looking to be the Red’s analog to Arcane, and that is damn frightening. Lemire makes sure that each character has beats that are hit in this issue. So much so that even Socks and The Shepherd have their shining moments. My god the exchange between Maxine and The Shepherd is heartbreaking. For you American Vampire readers, there is a small Easter egg hidden in here as well.

Absolutely without a doubt buy it! New readers could probably jump on here without much difficulty. If you left the series, jump back in!