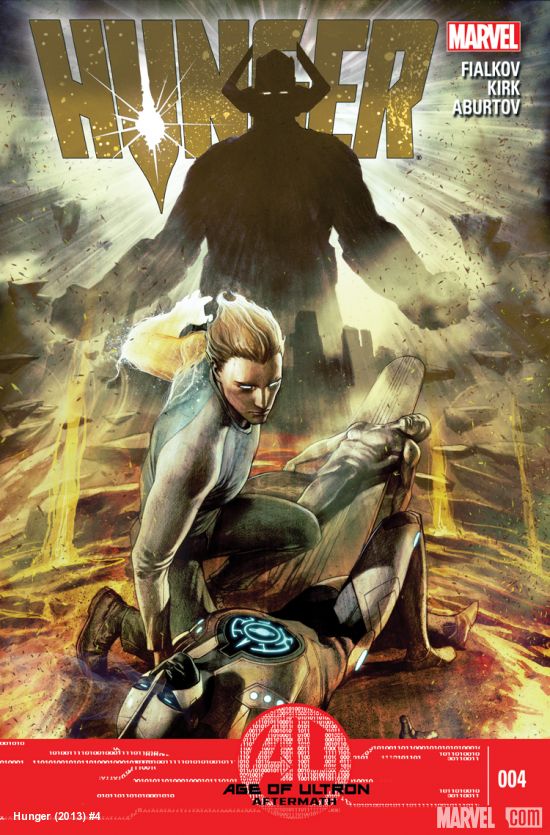 More often than not, I feel like an idiot when a publisher releases one of these “universe-changing” micro-events. I know damn good and well that I shouldn’t bother, that I should just wait until the actual event–in this case Cataclysm–and either pick the whole thing up in trade paperback or read a review or synopsis online. But, there is always that animal part of me that feels like I’m missing out–like I’m going to miss something amazing and I won’t be able to ever go back. But, that’s why we do these reviews: so that you, dear reader, don’t have to make the same mistake.

Issue #4 is the end of the Hunger story, and it ends much the way I expected: with a promise to continue in Cataclysm. There are some cool moments in the issue that are worth mentioning, and a few more that I really shouldn’t for spoilers. This is the issue where Rick Jones finally steps up to become the hero that he’s meant to be, whatever that means. Part of the problem with this series is that if you’re not plugged into the Ultimate Universe it’s very difficult to care about these characters. My research didn’t unearth much about Ultimate Rick Jones that isn’t hinted at in Hunger, and yet I still felt like I didn’t know the character. I’m not sure whether this is a deficiency in the writing or in the character, but I also felt much the same way about Ultimate Captain Mahr Vehl. There is some cool action and a little dimension-hopping in this issue, but that doesn’t keep it from landing in a big puddle of cliche cliffhanger on the last page.

The art is exciting and very pretty to look at, but it’s not enough to save the book. There are some truly epic moments that look really great on the page, and the colors and effects take the whole thing to another level. In fact, let’s call this my vote for a Leonard Kirk drawn Silver Surfer title. But, let’s also have it without the silly event attached.

Wait on it. If you’re interested in what happens to the Ultimate Universe in the future–which I will not speculate on–pick this up in trade with a collection of the rest of Cataclysm. For now, be satisfied that you know pretty much what happens in this little series and move on.