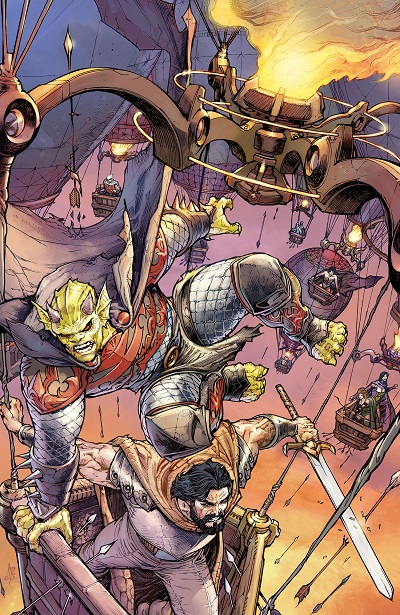 Being a newer reader since the launch of the New 52, there was something I had not been privy to until this very day.  That gut-wrenching feeling of a series you love coming to a close as the cancellation axe drops upon its head.  While I am absolutely astounded and pleased that I was able to get two years out of such a niche title, it still stings a little to have to say goodbye to a series I looked forward to each month.  The series I mourn in this case?  Demon Knights.  An amusing romp through the sword and sorcery days of the DCU, this title brought together a mismatched group of ‘nobodies’ that I had little to no familiarity with, and turned it into a fun adventure with characters I grew to love.  So, let me adjust my black armband, and lets take a look at the final issue of Demon Knights with chapter 23.

The team has finally completed their quest of obtaining the mythical Holy Grail and returned to the capital of their former comrade Al-Jabr to assess their options.  But their boisterous sometimes-ally of Vandal Savage has decided that their relationship of constant double-crosses must come to an end, leading an army of giants to their gates to see them all crushed for their insults.  As the Knights face insurmountable odds on the field of battle, can they work together to overcome the threats that have been brought to their doorstep?  Or will the dark power of the Black Diamond consume them all before they can enact their desperate plan?

Venditti continues to write a playful team of characters, that for all intents and purposes should not get along, into a cohesive unit that plays off of the strengths and weaknesses of its characters.  Like a good game of D&D, the players in this tale each maintain their own specific goals and motives, but are forced together through various misadventures; sowing laughter in their wake as they face slews of medieval and magical threats.  Admittedly, this chapter slows a little in comparison to others in the humor department, but is instead replaced with the wrap-up of practically every dangling plot thread that the series has built to date.  So, while not as gleeful, it still provides a solid and fulfilling ending to the series as a whole.  On top of the usual interactions that have always been the crown jewel of the title, this final chapter brings a battle of large enough scope to justify an ending; and offers a threat that can tax the team to their limits as the series comes to a close.

Before I start on the art, I adore the work of Phil Winslade in the few arenas I have been privileged to see his work.  That being said, the last 22 issues of this series have maintained a very clean and cartoony style that helped propel the run into the comedic-action-adventure slot that it was trying to fill.  Winslade, with his muddier and detailed stylings, brings a lot more seriousness to the title than it has had before, and it comes as a jarring shift in comparison to the rest of the light and whimsical run to date.  His work on the characters stands strong, allowing the facial expressions that help sell their big personalities where they would otherwise fall flat.  And technically speaking, the artwork is wondrous and captures the din of medieval warfare spectacularly; but as a final chapter I feel it would have been better to maintain the tone consistently through to the end in the artwork.

If you’ve been reading Demon Knights consistently or casually, you would do yourself a disservice to skip over this final chapter that ties up items dating as far back as Cornell’s run.  Those of you looking for a quick fix of sword and sorcery can easily find as much in this chapter as well, but I would highly recommend going back to read earlier issues first to get a feel for the characters beforehand.  As I said above, it’s a shame to see such a promising little title that was offering something different go the way of the Dodo, but with 24 issues still out there for many to read; the Demon Knights will always find a way to ride again.