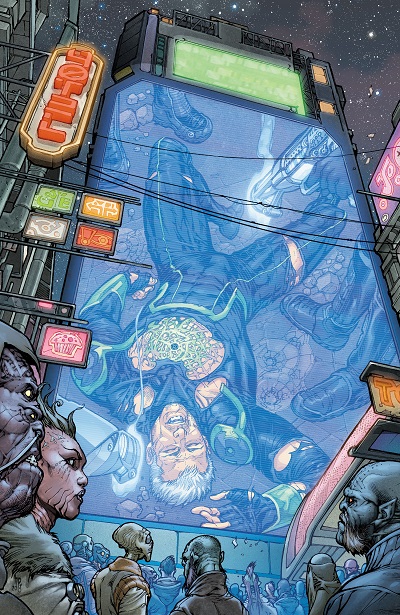 Hi.  My name is Sean, and I enjoyed Threshold.  Yes, surprising as it may be to you, there are some of us out there that fell on this side of the critical fence.  Mind you, our numbers did not count very many among us, not many of us at all really; which leads me to my second cancelled title coming out of DC Comics this week in the form of Threshold #8.  But what was Threshold and how did it come to this sad state?  Well my friends, Threshold was a snarky and goofy look at the lives of DC’s various ‘retired’ space heroes of old, tossed together to survive in a game known as ‘The Hunted’ where an entire planet was gunning for their heads.  Plagued with a combination of characters practically nobody cared about, mixed with a plot device that was a bit stale by the time it hit the shelves, and topped with a cast so wide that it took a good four issues for me to even put names with faces; it still managed to win me over through sheer personality as the title continued.  But that trek has come to a close, so lets take a look at the last chapter with this week’s Threshold #8.

‘The Hunted’, the program that has kept our heroes living in constant fear, has been cancelled.  But what to do with all of these various characters that have been brought into the spotlight now that the show is over?  Caul and the rest of his rebellious ‘teammates’ are going to find the answer to that question as they are brought to face the dreaded ‘Programming Executives’, who even now look to find a different way to package the program and regain their ratings superiority.  Not all has been as it seemed though, as some of our heroes are raised up and find the promotion they desire, while others discover the crushing truth that they do not have the star power to headline or salvage a run of their own.  Can the brave marketing executives finally find a cast and plot device to create a successful high-selling story with our heroes?  Or will they be relegated to the dust-bins of programming history for all time?

I’m just now catching up with my reading of Giffen’s work after finding a taste for his tone within his latest endeavors.  That particular tone in question, irreverent fun.  This final issue captures that feeling particularly well, as we get to see a ton of meta-commentary from the characters on what could have been done (and in some cases failed avenues that have been done) to salvage this title and sell it to the reading community.  Wrapped in the guise of a cancelled television show, the marketing executives deliver comedic looks behind the curtain as all of the heroes are placed back in their respective toy-boxes; creating a hard ending for the show and the series with their efforts.  It not only acknowledges its shortcomings, but almost revels in its inevitable failure, and in turn makes for a fun final chapter that at least made the journey worthwhile to get to this point.

The artwork from Winslade here fits quite well, which is surprising considering my recent criticisms of his style meshing with the comedic tone of the final issue of Demon Knights.  But with the rough-and-tumble gritty future as a backdrop, his style plays exceptionally well to the juxtaposition of these goofy characters within that dark setting.  With minimal action (something even commented on by the characters in this story), he has the hard job of selling essentially conversations, but does so by adding a lot of comedy easter eggs into the background; keeping the reader engaged as the talking heads take up the foreground.  Raney’s work on the backup featuring Star Hawkins (who was come out of nowhere to be a favorite of mine) takes the correct path of a brighter and lighter tone, as the misadventures of Hawkins and his robot ex-wife are pure silliness with their interactions.  With the largest action sequence in the backup, he also manages to capture some interesting choreography, and sells the final moment of the title with the slack-jawed facial expressions of all involved.

What can I say, it’s not for everyone.  This final chapter goes a long way towards putting the underlying tone of the book in the forefront with its zany meta-commentary, but with no background information on these characters I would be hard-pressed to tell non-readers to go buy it.  I will recommend checking out the future trade from the library at the least though. Because even with all of the shortcomings and faults I listed above, it still has something to offer to those who can work their way past them; quite a few chuckles.