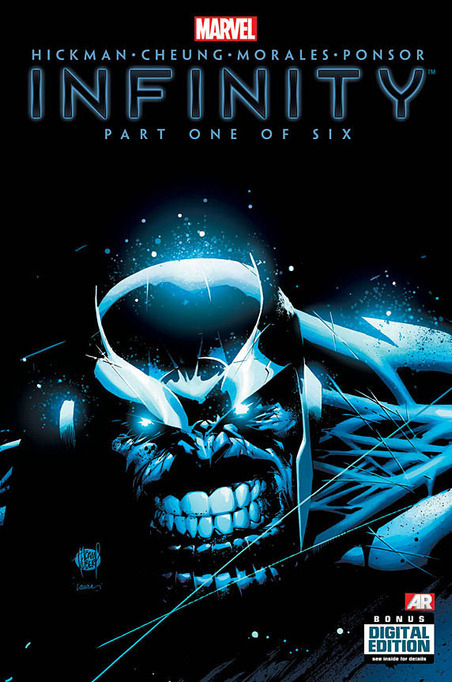 Marvel’s latest mega-blockbuster event comic, Infinity, hits stands today, just a little under two months since the last big event crossover story wrapped. Brian Michael Bendis’ Age of Ultron had been in the works for years over at the House of Ideas, and by the time it was released, the characterization and tenor of the book seemed out of step with the direction the Marvel Universe had taken since he left the Avengers side of the sandbox. Unlike the Bendis’ story, however, Infinity appears to be a more direct extension of writer Jonathan Hickman’s work on Avengers and New Avengers since the Marvel NOW! relaunch. While this shift in direction away from the Bendis-era of storylines and themes (see Secret War through House of M all the way down to Siege and AvX) does result in a more refreshing event experience, there are still a few moments of inaccessibility and confusion for readers unfamiliar with Hickman’s work. Ultimately, however, Infinity is an appropriately epic, fast-paced, hard sci-fi comic book—at least for this debut issue.

Infinity #1 opens with a scene of an alternate Earth exploding that has already played out in Hickman’s New Avengers series. A bit of background: in Hickman’s New Avengers, the Illuminati—a group of the greatest thinkers and leaders from the key factions in the Marvel Universe (Mr. Fantastic, Iron Man, Black Panther, Namor, Beast, and Black Bolt)—gather together to combat the literal destruction of the multiverse.

Meanwhile, over in Hickman’s Avengers, Captain America and Iron Man have been recruiting non-stop to build the biggest, baddest, more bodacious Avengers roster of all time. After all, as Captain America puts it, Earth is “an Avengers World.” There’s this whole story arc running through Avengers featuring a race of ancient beings called Builders who essentially float around the universe, raze entire planets, and rebuild new life in the aftermath. Two of these Builders are now on the Avengers roster, as well.

And that’s the background. Hickman’s stuff is way out there. I’m not up to date on either series, so I entered Infinity #1 with relatively little background into what was going on. The destruction of the Multiverse angle is probably the more intricate plot thread running through Hickman’s work, but fortunately it isn’t featured that prominently in this issue aside form the opening sequence. Instead, the emphasis is really on the Builder’s and their path of destruction (and construction). As a result of their latest efforts, billions of beings from all over the universe are being massacred and/or fleeing their home planets. SWORD picks up on the refugee movements and warns the Avengers, setting up a cosmic space opera mission reminiscent of classics like “The Kree-Skull War” and “Secret Wars.” The scope is wider than wide as Hickman takes us from planet to planet, demonstrating just how dangerous these Builders are and just how battle-hardened the Avengers are.

But what about Thanos? He is, after all, on the flipping cover to the whole book, and he is, after all, the villain most associated with the word “INFINITY.” Oh, and he’s also Marvel’s Emperor Palpatine in terms of their movie universe, so what’s his deal in this whole thing?

Surprisingly, his role in the Builder arc is practically nil. Instead, Thanos is interested in, of course, finding his Infinity Gauntlet and acquiring tributes (i.e. – mass murder of alien races) to Death. You know, normal fare for the Mad Titan. Much of the Thanos-centric material in this issue is focused through a surrogate, an assassin Outrider sent to uncover “secrets” from Earth’s Mightiest that might reveal the location of the Infinity Gems. The Outrider goes to Attilan—the kingdom of Black Bolt and the Inhumans—and the sequences there are absolute MADNESS. Black Bolt, in just one scene, completely steals the issue, setting up multiple potential plot threads and the upcoming Inhumanity storyline.

So I ask again; what is Thanos doing here? Infinity #1 spends more time setting up the Builders vs. The Avengers, so what is Thanos’ play? Well, by issue’s end, all is revealed. With the Avengers off battling the Builders, perhaps Thanos can finally, once and for all, give Death the planet she’s always wanted: Earth. 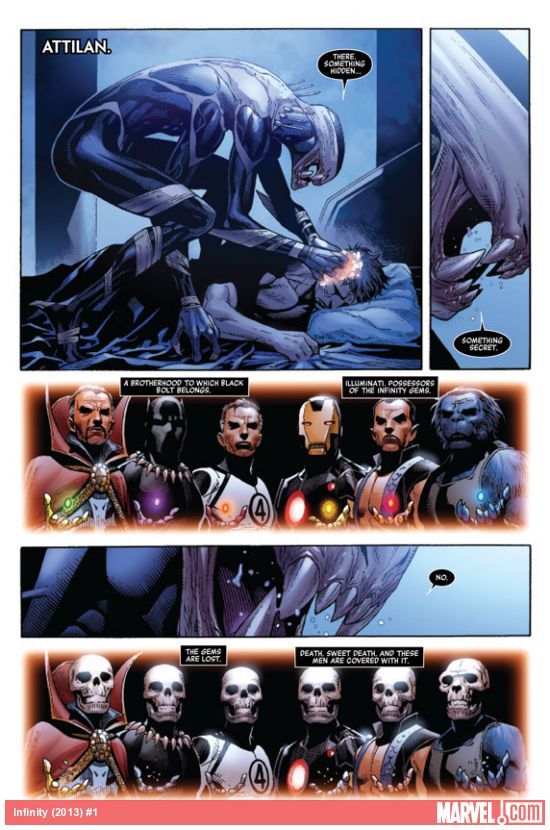 Two epic, massive storylines run through Infinity #1 (two-and-a-half if you count the seeding of Inhumanity) and I can genuinely say I don’t know where the threads will go. Hickman’s mode of writing—his architecture, his narration, his scope—is a refreshing change from the last 8 years of event comics. The tempo of the issue is breakneck, but Hickman leaks just enough information to not confuse new readers too much (and I will admit that this IGN article helped a lot after my first read through of the book). The immense stable of characters at play (the cast page has over 40 floating heads on it) are handled effectively and efficiently—even fan-favorite Captain Marvel, who is totally appropriate for a cosmic story such as this one, gets to do some leading!

Simply put, Jimmy Cheung’s artwork is fantastic. I’ve been a fan of his dynamic realism and careful designwork since his run on Allan Heinberg’s Young Avengers, and he brings that same scope and care to Infinity #1. Sure, some of the faces in the crowd scenes are a bit too similar, but overall the places he brings the reader over the course of the 60+ issues are some of the most visually engaging and stunning set pieces I’ve seen in comics. And the creatures—oh man, the creatures. Artists like Cheung and Olivier Coipel are custom-made for summer events like this, and I’m glad Cheung kicked us off right. The equally talented Jerome Opeña and Dustin Weaver pick up art duties for the next few issues, but Cheung will be back for the final chapter.

Buy. Infinity #1 is old-school high fantasy meets hard sci-fi. Jonathan Hickman brings his dense storytelling over from his Avengers and New Avengers series and weaves in even more layers to include every corner of Marvel’s cosmic universe. While there are questions of accessibility for new readers, generally speaking the pace and scope and sheer thrill of Infinity #1 is worth the price of admission alone. And, of course, the over-over-sized page count helps (and the stellar Infinite Comic, Infinity: The Silver Surfer, from Jason Latour) validate that price tag as well. Infinity #1 has all the makings of a classic cosmic comic event in the vein of the “Kree-Skrull War” and the original “Infinity Gauntlet” minis. Definitely check it!