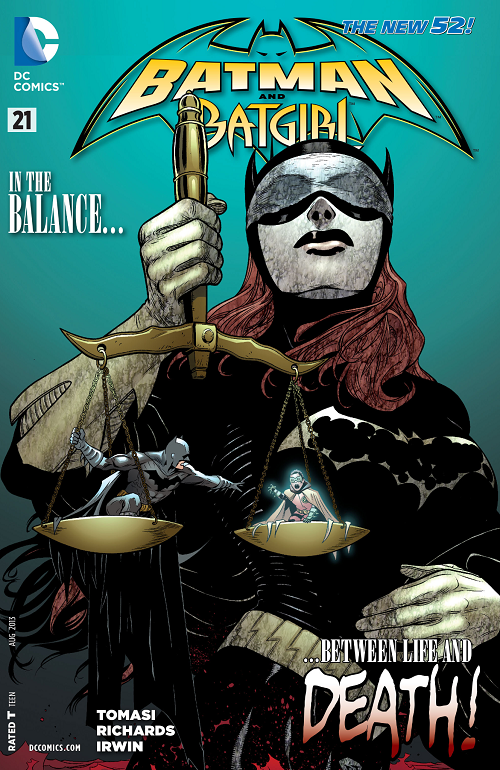 Bargaining: The third stage of grief in the Kübler-Ross model. It’s the stage where people drive themselves crazy with “what if” and “if only.” It’s only fitting that Batgirl should appear in this issue, as she has been going through the loss of her own brother. Issue #21 of Batman and Batgirl hits all the right emotional beats without turning the story sappy.

We all love Batman, but sometimes it’s hard to feel sympathetic for him. He’s pushed his friends and family away, and has kind of been acting like a jerk-face. By bringing in Batgirl, Tomasi has given us a sympathetic parallel to Batman. Both are going through a personal loss, and both feel extremely responsible for it. It’s through her thoughts that we get a glimpse of what might also be running through stubborn old Bruce’s mind.

Batgirl pretty much carries this entire issue, and is probably the first of the Bat-family to crack the bullet-proof plating Batman put up around his heart after the death of Damian. Gail Simone has shown that Barbara Gordon is a strong individual, and Tomasi is able to build off of that with her final confrontation with Batman.

The guest art team does a pretty decent job with the issue. They capture all the necessary emotions and expressions needed to sell the story. However, there are a few inconsistencies with Batgirl throughout the issue, but nothing that is distracting. I only picked up on them on my third read through, but now I see it everywhere.

I’m not going to give away any spoilers, but there is a line near the end of the issue that potentially adds another possible candidate for the next Robin. I doubt this person will actually be the next Robin, but it is a fun notion to think about.

Buy It. This has been the strongest of this grief story arc so-far. Batgirl is heavily featured in this issue, and acts a great surrogate for our sympathies.