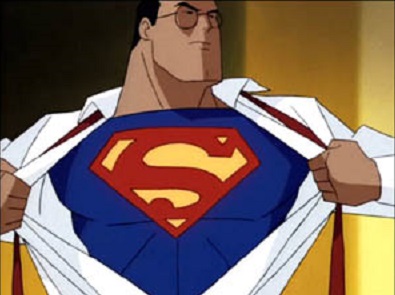 Ask anyone about comic book cartoons in the 90’s, and you are sure to get an overwhelming response of excited fans reminiscing about Batman: The Animated Series, the X-Men, and even Justice League Unlimited (even though it didn’t see release until the early 2000’s, it blends so well that most forget).  But living under the shadows of these titans was a little gem of a series that would have thrived in any other time frame of release, Superman: The Animated Series.  Released in 1996 while providing the same Bruce Timm-style animation and mature storytelling as its Batman predecessor, Superman was able to distinguish itself by being both lighter in tone even while embracing its hard science fiction roots.  So in the weeks leading up to Man of Steel’s release, I thought I would go back and re-watch this series to help quell the itch as the movie neared.  And what better time to do a quick overview of this overshadowed little series than now, during Superman Week here at Talking Comics!

Where Batman had found its niche in vengeance, brooding, the night, and all that; Superman: The Animated Series firmly staked its claim on the opposite side of that coin even with all of its similarities.  Showcasing vibrant colors and focusing on the burning resolve of the citizens of the DCU, there is an unabashed sense of hope throughout its 54-episode run as Superman tries to make the world a better place simply because he has the ability to.  He is not just happy, but elated to be of assistance, and finds real joy in protecting the city of Metropolis and the world at large as he light-heartedly banters with every person he meets. His alter-ego is also not the bumbling fool that had been so popularly portrayed in the movies to date, and instead was a jovial self-confident member of the Daily Planet; working alongside his supporting cast as a true friend and equal to his peers.

Looking at Superman himself, our titular hero is not the unstoppable god-like figure that was coming into popularity at the time in comics, and instead leans towards the ‘under-powered’ Byrnes era hero, adding that necessary humanity to the character as he struggles to perform these Herculean tasks that are set before him.  This is a Superman that could conceivably be killed by the threats he faces, which succeeds in ramping up the melodrama of each episode (my son sincerely thought Superman dead on multiple occasions) while adding that air of relatability to the character that modern audiences still struggle with to this day.  Going back to watch it again with more mature eyes, it really was an astounding blend between every aspect of the hero.  Protective without being overbearing, confident while humble, and hopeful while pragmatic; it is the paragon of what every individual strives to be.

The threats that helped bring out these positive traits were vast and varied throughout the shows run, and did a splendid job of showcasing the classic villains of the Superman mythos.  While the series pitted Superman against the likes of Lex Luthor (evil untouchable businessman version), Bizarro, Livewire, Mr. Mxyzptlk (voiced by Gilbert Gottfried!), Metallo, Intergang, and even Lobo; the overarching nemesis of the big guy in blue is Darkseid and his Apokoliptan generals.  Running as the backbone to the entire series, it is a fitting counter to the theme of the show as Superman continuously fends off the advances of Darkseid as he seeks to crush the free will and hopes of the ordinary citizens of Earth.  Acting as the main villains, Superman is constantly beset upon by the likes of Desaad, Steppenwolf, Granny Goodness, and the various forces of Apokolips until it finally culminates in the series finale; when a ticked off Superman steals a Mother Box, boom tubes to Apokolips, and proceeds to beat the crap out of every New God he sees (utilizing the Peekaboo Gambit to tackle Darkseid himself).  It’s a real conclusion to the long-form story, and is entertaining as all hell to see the heretofore defensive actions of Superman turn to full out offense.

Confident with their recent successes in Batman: The Animated Series, Superman was not afraid to make sweeping changes in canon to forge its own path that honors the source material without being beholden to it.  Most notably from the show’s start, is the simple streamlining of one of his biggest adversaries (which worked so well that I thought it was canon until recently reading the comics themselves); Brainiac.  No longer an alien force, he is intrinsically tied to Superman’s origin as the artificial intelligence advisor to Krypton’s High Council; who, after becoming self-aware, realizes that if he warns Krypton his time will be wasted on running rescue scenarios rather than saving himself.  It is a change for the better and allows future stories involving the computerized villain to have a more personal connection to our hero.  Another example of change to allow better story-telling, Superman’s escape pod as a child acts as his ship to travel the stars.  Keeping with the weakened state that they set out with at the start, it is an easy adaptation to allow the science fiction inter-planetary travels of Superman without betraying the vision they had for the character.  The changes are well-thought out and introduced in a manner that makes it difficult for canon sticklers to be upset about them, but go a long way in creating a Superman cartoon that has the mature elements that B:TAS pioneered without losing the innocent fun for the younger crowd.

While S:TAS can easily stand on its own merits, one cannot speak about it without mentioning one of the biggest strengths that all of the DCAU series’ had going for them in their favor; the interconnected nature of each show.  A good decade before the Marvel Cinematic Universe was a twinkle in its creators’ eyes, DC was running on every cylinder in its animated front by giving audiences the closest thing to comics on their televisions.  With the Batman and Superman Animated Series running concurrently, there were natural crossovers on multiple occasions that respected the history that both had built for themselves.  The Joker comes to Metropolis, and Batman follows suite for some team-up fun.  Bruce Wayne has gone missing?  Uh-oh, Superman better don the cape and cowl to keep order in Gotham while he tries to find his friend (leading to a very surprised Bane when he shows up for a round of fisticuffs with the Bat).  The intertwined nature that DC built as its base allowed both shows to slowly introduce other key members of the DCU such as the Flash and Green Lantern in S:TAS, which eventually culminated into the Justice League series (and even broader Justice League Unlimited) to follow in the trail that had been blazed.  It was textbook brand building on an animated scale, and the Superman series was the integral second half of that formula.

Overall, Superman: The Animated Series does its fanbase and the character proud.  Light-hearted with enough plot to keep adults entertained, it is able to find that difficult middle ground for the most part by sticking close to its intended theme.  For those of you who never caught the show on its initial run, or those like myself who had not seen it in 15+ years, I highly recommend going back and giving it a once over.  While admittedly not as ground-breaking as B:TAS, it is still a fun show all around that highlights many of the unique aspects that has made Superman such an icon for decades.  And for those of us bringing up our newest generation of comic fans, a great family friendly run to allow both children and parents alike to enjoy the world of Superman in its full vibrant glory.