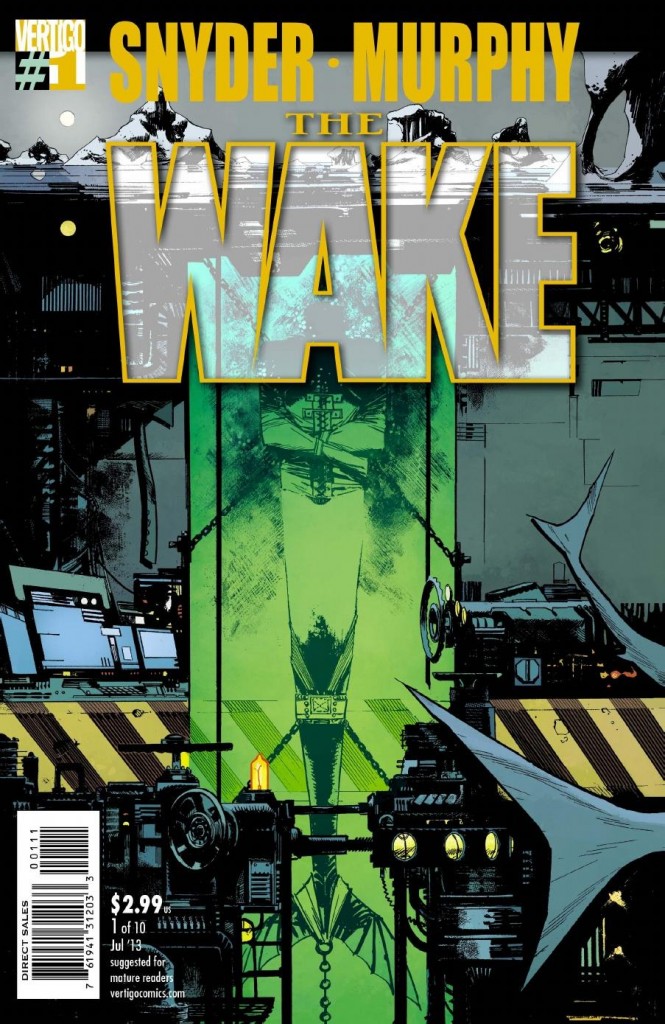 The comic book world is dominated by Dark Knights, X-Men, Avengers and Supermen and the fascination with these long standing, and mythic properties often dwarfs the other titles that hit the stands. In this kind of top heavy landscape it takes a writer with a lot of big league heft to get a niche title noticed. Scott Snyder is just such writer. Snyder has promised that this twisting horror series would be something completely different from anything he’s ever done, but will it be as good as it is unique? The answer is, absolutely.

There is a lot of different styles being twined together in The Wake #1. There are shades of Stephen King’s deep focus on character, Stanley Kubrick’s wildly epic scope, and even parallels to Brian Wood’s environmental sea parable The Massive, but the one name I couldn’t seem to get out of my head while reading the book was John Carpenter.  Writer Scott Snyder captures perfectly the sense of man vs. the unknown that permeated so much of that filmmakers early oeuvre. This is The Thing filtered through the lense of that most classic and effective of narrative devices; the protagonist doing whatever he/she can to get their family back.

But, The Wake #1 is more than just a simple redemption story. It’s a multi generational epic that focuses on three disparate people. Dr. Lee Archer, an expert in aquatic mammals and the sounds they use to communicate with one another. She is a smart, strong woman who lives in a our present time. We also get a glimpse at a boy living in a terrifying dystopian future and a primitive man living in a distant past, who has the misfortune of stumbling upon a particular artifact. I’m not sure where all these tendrils are leading and just how they will intersect, but I want more and I want it now.

Snyder is joined on this Carpenteresque odyssey by Punk Rock Jesus creator Sean Murphy.  This isn’t the first time these two have worked together and the relationship is felt in the perfect marriage of visual and text. Murphy’s scratchy lines, fine detail and expressive faces give life to the varied world in The Wake. In fact, his look is crucial in creating the 80’s film vibe the book communicates so effectively.

Buy It –  The Wake #1 combines the styles of many of the best storytellers of the last 30 years into a perfect mix that is somehow still Scott Snyder through and through.  We have barely seen anything of the deeper story at work, but if it pays off, this new Vertigo series from Snyder and Sean Murphy will be something truly special. If you like ambitious, epics with a strong sense of horror then this is the title for you.