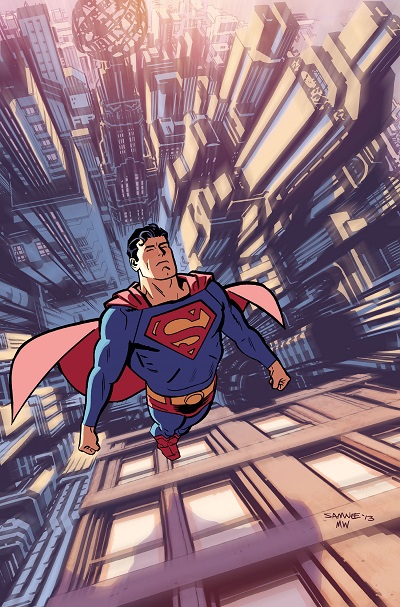 Some of you may have heard about this little movie called Man of Steel that is opening in a few weeks.  Well, due to the hype surrounding it, DC Comics has wisely decided to support their big guy in blue by releasing a digital first comic called Adventures of Superman.  Weekly in format, this title sees a different creative team each chapter telling shorter vignette stories of the more iconic version of the character (red underoos and all) in a vein similar to the surprising success that Tales of the Dark Knight does for Batman.  Lagging behind the digital initiative by a few weeks, they then collect these chapters into print and release them into the untamed wilds of we paper consumers.  In theory, a great way to service both sides of the distribution fence, but lets see how it works in practice with this initial issue of Adventures of Superman.

Taking a much more classic superhero spin on the character than some of the other tales contained within, the first story pits the always helpful Superman against a low-rent crook who has found himself driven mad with supercharged psychic powers.  Struggling to help rather than mindlessly punch his new adversary, Superman may find out that this person is nothing more than the victim of an even larger monster behind the curtain.

Parker provides a cute little story about Superman trying to live up to his ideals and paying the price for it both physically and emotionally.  Where this chapter really stands out is the cartoonish and colorful artwork provided by Chris Samnee.  Looking more like stills from a new Superman animated television show, it lends a feeling of all-ages adventure without short-changing the story in the process.  All in all a fun, if not a little light on story, punch-em-up between our favorite Kryptonian and the pawns of a larger foe.

Easily my favorite of the three stories presented, this is about as unorthodox of a Superman story as one can do while still really getting to the heart of what makes him so special to so many.  Telling the story of two young boys playing a game of pretend, the one takes the role of Superman as his friend cycles through the various villains that he wants to face him down with.  Little do the two know, that their game is being observed by another though.

Jeff Lemire pulls writing and art duties, providing a deceptively childish scrawl to the line work that melds absolutely perfectly with the story being told.  With the feel of children’s artwork, the story takes on a whimsical tone of what Superman means to these two children, and how in turn that affects those around them.  Beautifully told in its simple format, it stands out from the other two with its emotional overtones laced heavily with mirth and fun as the two kids play.

The final chapter in this collection brings us the humorous misadventures of Superman meeting his mirror image Bizarro in the streets of Metropolis.  As the bumbling copy tries to ‘help’ the citizens of the city, he leaves nothing but a wake of destruction in his path.  Attempting to converse with Bizarro leads to only more trouble, as speaking to him in his native tongue is much more difficult than it seems (wait, much less easier?).  Can a mutual understanding be met with the right words?

Rossmo gets to take the artistic reins in this short story, and brings a visually stunning style to the Man of Tomorrow that is both vibrant and energetic; an absolute must for a humorous story involving Bizarro.  Less serious in tone than the first story, but not as playful as the second, it finds a nice middle ground between the two previous styles that fits with Superman in a great fashion for this particular tale as well as overall.

It’s absolutely impossible to give an overall grade to this collection of stories.  With such wildly differing visions and takes on the character, I can almost guarantee that at least one of the stories will tickle your fancy; but as an overall experience each story has to be approached and taken on its own valor.  So while one may be best served by finding the chapters presented in the style they prefer and buying them singularly, but as an overall snapshot of what they have in mind, this first issue has a nice variety to give you a feel of what some creators may do with Superman in a short story format.