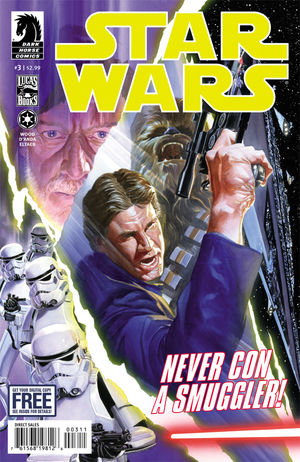 Brian Wood’s Star Wars title has brought a different dimension to the characters from their movie personas. Focusing on the first movie, we know Darth Vader to be a stoic, fearsome man; Luke to be the moral, innocent backbone of the Alliance; Leia to be the calm and collected princess; and Han to be…well, Han.

The first page challenges fans’ perceptions. Darth Vader, recently demoted from his Star Destroyer, moves onto the construction site of the second Death Star. Keep in mind that this is a construction site – the ultimate slap-in-the-face to a Sith Lord. Boiling under that helmet is a spurned, powerful man. Vader will have to do something drastic to move from his currently low position to the power he will wield in The Empire Strikes Back.

Leia continues to hunt down the Imperial spy with her secret force. However, there is more going on than a hunt for a spy. Farm boy Luke Skywalker shows interest in a fellow pilot, Prithi. Luke and Prithi develop a flirtatious relationship, one that grates Leia’s nerves in more than one way. It’s interesting seeing how Luke and Leia interact in this issue. They are still young adults, and with that come the behaviors and tendencies present in college-aged people. Luke displays a cocky, playboy attitude (remember, he blew up that Death Star and saved everyone’s asses). Leia, not sure if she is jealous of Luke’s interest in Prithi or annoyed at being ignored as a leader, takes action for the good of the team.

Another note on Leia: Wood hit on some of the emotional trauma Leia experienced with the death of her home world in issue 2. In this issue, we see her resilience. With resolve, the events of her short time with the Rebellion are numerated. Leia has proven her loyalty to her cause, and one would argue her role is more important than the man who blew up the Death Star. One thing can be said about Leia: she is, and always will be, a fighter.

Star Wars continues in its engaging story with issue #3. The advantage to the comic book is its ability to give third person information into what the characters are thinking. It’s wonderful to see inside their heads, to get the feel of what makes them tick, to see what drives them. While there are books that explore these characters in-depth, this new comic series is a great place to start for movie fans to explore the Star Wars universe outside of the silver screen.