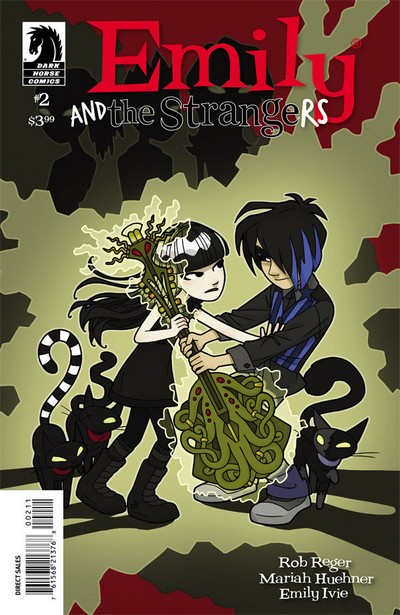 Emily won a radio contest by writing the rockinest rock song. Her prize is the guitar of music legend Professa Kraken. The catch is that she now has to enter a battle of the bands, with a band organized by a moody, classically trained boy named Evan Stranger. Emily doesn’t work well with others but she really wants that guitar so she’s giving the band thing a shot. As long as they do it her way.

Emily is an inventor, a robot builder and a cat collector. She’s a quirky girl with brains to spare and her goofy vocabulary belies her no nonsense attitude. As the band struggles to figure out what’s not working, Emily storms off and declares herself done with the whole experiment. A chance encounter with Raven, an assistant bot Emily built who has since become independent, gives her hope that she’s found the missing piece for the band.

With a multitude of very different personalities and musical styles, the band members are working hard to create something cohesive together. Magic seems to be happening, but Emily’s need for ultimate control could be the wedge that pushes them apart before the battle of the bands can be won.

Verdict: If you have a teen, young adult or even a ‘tween’ who enjoys comics, this is a really entertaining, cute story. The art is colorful and polished. Emily is charming in an eccentric way and her friends bring their own charms to the table. I have a 11 year old niece who races through comic books and is always on the hunt for something new, so I’ll definitely be picking this one up for her. No adult language, nudity or violence thus far so I could see this series being appropriate for any age that can read.