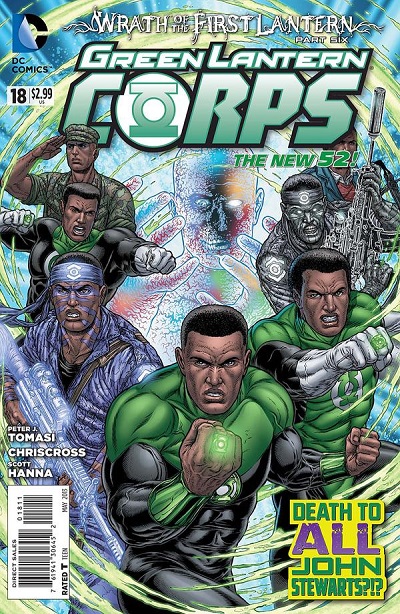 The first time a plot device is used to handle exposition, it’s usually quite interesting.  The second time, it can begin to get a little trite, but slight variations can keep it fresh.  The third time, with the promise of the same device to be used again in the future (see upcoming Red Lanterns #18)?  Well, then it gets a little tiresome.  This is not to say the issue is bad as an issue within the Green Lantern Corps title, but for those of us reading the storyline in the manner the publisher dictates (ala Part 6 in a larger story), it is rather perturbing to get 3 issues of history lessons with one plot issue in between.  But with that criticism aside, how does Green Lantern Corps #18 hold up as a single issue?

The First Lantern, after breaking Guy Gardner with his temporal tampering last issue, has tracked down John Stewart and Fatality out in deep space.  As he re-writes the already painful history that has brought the two to their current roles in the galaxy at large, will he wear down the pair in his emotional war of attrition?  Or can John and Fatality utilize the strength their trials have built within them to overcome his assault?

Reading as a historical recap of John Stewart’s past, Tomasi has done a good job of filling in potential new readers (from the New 52 launch and afterwards) into how John has become the man he is today.  Utilizing the plot device of the First Lantern once more to facilitate this task though, may come across as quite stale to readers who are a bit more informed.  With long-time readers already aware of his history, newer devotees to the Green Lantern mythos seeing the same story delivery method twice before, and even readers of just the Green Lantern Corps title seeing the same thing done with Guy Gardner last issue; there is not much marketability to readers other than those who are curious about John Stewart’s past.  That segment will find that the writing is very solid for what it is trying to accomplish, compressing all of the marquees moments of the military Lantern into just one issue while still dabbling with alternate scenarios.  While obviously heavy on the exposition, that is the role this issue intends to fill, so it is hard to fault it for doing what it was fashioned to do.

The art within this issue is solid and functional for what is needed, with only a few panels really standing out as noteworthy (such as a scene in which Fatality and John Stewart share a ‘moment’ together).  Chriscross is unfortunately slightly inconsistent, with some facial expressions feeling quite natural for the situation, while others feel strained and just slightly off on the very next page.  It’s not poor artwork at all, and technically brings everything needed to the story, but it may just be the repeated delivery method itself that has eroded any standout images in this particular issue.  As in all Green Lantern titles, the colors are of the utmost importance, and Eltaeb fulfills these expectations with ease.  Utilizing the symbolic emotional palette to tell sub-stories within the images, he performs admirably within this issue as well.

Personally, I give this one a pass.  I’m going to lump it in with the other ‘History’ chapters that are not necessary for the greater story, but those who are curious on learning the ‘Secret Origins’ of the Green Lantern John Stewart, would be hard pressed to find a more concise and encompassing recap issue than this.  Hopefully, now that this is out of the way, Green Lantern Corps can start moving forward with its role in the overarching tale of the Wrath of the First Lantern.

Green Lantern Corps/Green Lantern: New Guardians #17 – Both great character studies/side history recaps of your Lantern of choice but not needed for larger story.

Wrath of the First Lantern: Second Round Scorecard!

Green Lantern #18 – Buy.  This is still where most of the action appears to be taking place, and contains a suspenseful story on its own.

Green Lantern Corps #18 – Like Corps/NG #17, a history recap of John Stewart.  Great if you want to know, but not required to follow the crossover.