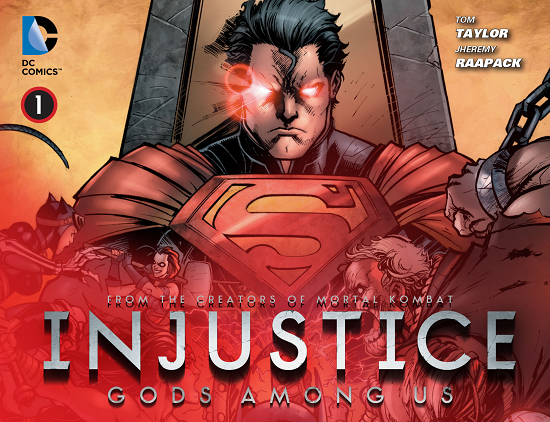 Injustice: Gods Among Us Chapters 1-7 (Digital)

Injustice: Gods Among Us is the comic book tie-in to the upcoming video game of the same name. The game will be set in a world where Superman has been ruling as a dictator. This is a separate continuity from the main DC Universe. Unlike stories like Red Son, Superman’s origin in Injustice is relatively the same as those many fans and readers know. This is a story about how someone that is pure, stands for liberty and justice, and seems incorruptible can be turned against everything he stands for.

Taylor has crafted a very emotional story over the first several digital chapters of Injustice. It is quite a ride and makes for an incredibly quick read. I found myself turning pages quicker and quicker to find out what happens next; hoping that what I was suspecting to unfold wouldn’t be how things went. I know something bad is going to happen and there is no way to change that.

Taylor has used the Joker very effectively as the catalyst for this entire change in status quo. This is another one of those tales that showcases just how much of a monster the Joker is. “Some men just want to watch the world burn.”

Chapter 5 is a side story to main events of Injustice, but provides some welcomed laughter and a reprieve from the grizzly end of Chapter 4. Since I am reading this series week to week digitally, I find that is fits in nicely. However, I can imagine that some readers of the physical collections of these chapters might find this out of place. With the end of Chapter 7 though, it looks as things are going to get even hairier as governments have started taking action against Superman by targeting the ones he love.

Despite several different artist tackling different chapters, I feel that quality of the art has been consistent and hasn’t really suffered. There is nothing distracting and the art hits all the important emotional beats of Taylor’s story.

Buy It. It has been a very fun and rewarding read. I have really enjoyed seeing how the actions of one man can have rippling effects that change the course of an entire world. These are huge changes! Injustice: Gods Among Us is something to tide you over each week before the Wednesday onslaught of releases. It’s only 99 cents per chapter. This means if you are reading digitally, you’re getting a slight discount.