Tarzan on the Planet of the Apes #1 Advanced Review 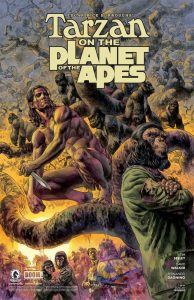 Tarzan and the Planet of the Apes. Two classic pop culture franchises join forces in one comic book courtesy of collaboration between Dark Horse and Boom! Studios.

Living in the jungle and separated from his ape family by human slave traders, Tarzan walks the thin line between ape and human. The story spans a century, as the notion of time travel is apparent, with far more time allotted to the adventures of young Tarzan than to the present day.

Combining previously stand-alone stories is always a risky proposition. Freddy vs. Jason and Alien vs. Predator weren’t exactly awash with critical acclaim. However, Tim Seeley (Nightwing, Revival) and David Walker (Shaft, Cyborg) organically mesh the two franchises. Both Tarzan and the apes question our views of outsiders and what it means to be civilized. Through action sequences and simple yet effective dialogue, Seeley and Walker convey Tarzan’s somewhat complex place in the ape civilization. Tarzan ‘s family clearly loves him, but the greater tribe doesn’t feel the same way about the pale, hairless primate living in their midst. This instantly makes Tarzan a sympathetic figure. There are lingering questions that remain unanswered at the end of the issue. However, Seeley and Walker have written a fairly tight story that serves the needs of readers who are not overly familiar with these franchises.

Fernando Dagnino’s (Suicide Squad) art and Sandra Molina’s (Batman & Robin Eternal) colors are what really makes the issue tick. Dagnino beautifully captures the physique of man and beast alike. However, his art really shines when characters convey emotion through their facial expressions. Whether it’s an angry silverback or a jubilant Tarzan, character art does as much to tell the story as the dialogue does. Molina’s colors richly enhance Dagnino’s foundational art. There’s one panel with charging dinosaurs (you read that right) that would be at home in a museum exhibit about the triceratops. The penciling helps tell the story, but the art is what ultimately sets the mood.

This issue is able to accomplish a lot without becoming cluttered, and that’s no small task. The 22 pages cover a great span of emotions in a tight-knit story. The artwork is the heart of this issue, illuminating two classic stories in one book for fledgling and seasoned readers alike. Give Tarzan and the Planet of the Apes #1 a chance if you want a comic that’s fun, approachable and all-ages friendly. The art alone is reason enough to purchase this comic when you… swing by your local comic book store this week.