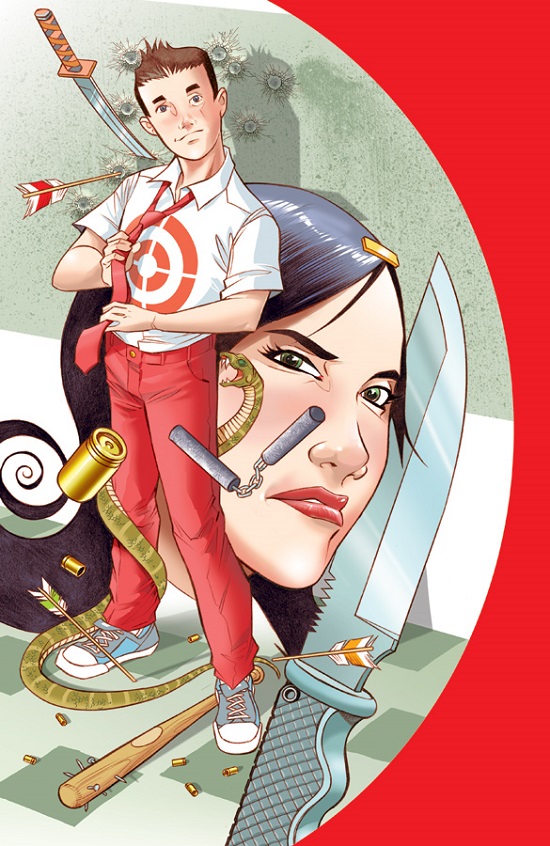 Written and Illustrated by Jimmie Robinson

Five Weapons is a brand new mini-series that takes place at a school designed for the sons and daughters of assassins. As the title suggests there are five different weapon clubs a student can choose to join in order to master their weapon of choice. Both the story and art from Robinson remind me of Japanese manga; the everyday life coupled with whacky, grandiose ideas.

From the start Robinson pulls us in with well-crafted, but natural dialog as our main character, Tyler Shainline, gets a tour of the school. The tour is used well to introduce both Tyler and us to this unique academy of assassins. Most importantly, the exposition doesn’t feel forced. Most of this first issue is used to establish the world of Five Weapons and by the end of the issue we get a twist that reveals what the plot of the series will be.

As I mentioned above, there is definitely a manga feel to this book; it’s the way Robinson illustrates sound effects, exclamation points, and movement arrows. The names characters are given reflects that person’s job or appearance, and it’s this silliness that further hints at a manga influence. However, just like the story and dialog, it is not so over the top that it makes you want to roll your eyes and close the issue.

For me this is a buy. There is a definite manga influence to Five Weapons. As someone that isn’t a huge fan of manga, there is still an appeal for this series. Robinson provides engaging and entangling dialog that pulls the reader into a tale of mystery in a whacky, fun, little world.