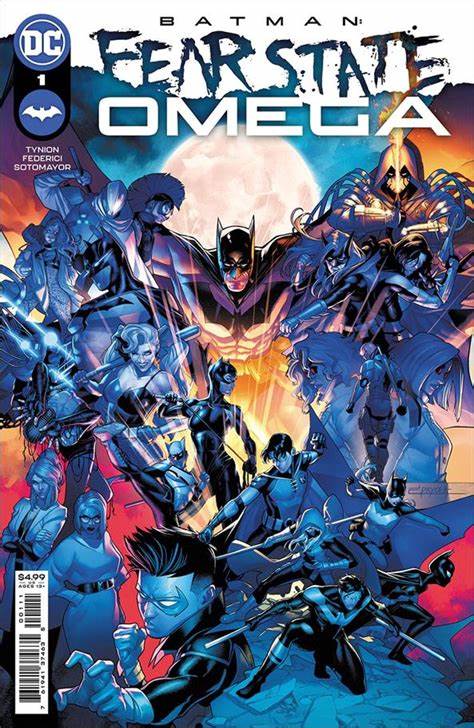 Thank goodness for this Omega issue! Coming out of Batman # 117, I was left feeling like I was missing a lot of information. Its sudden ending left a lot up in the air. While it wasn’t anything pressing, to end a run without any form of epilogue left me feeling shorted. Tynion ended his event with an explosive finale, but no follow up on the characters and where they stand. Enter the Omega.

Batman: Fear State Omega opens with Scarecrow being transported to the asylum. Per usual, the villain’s henchmen stage an ambush to break him out of police custody. Scarecrow informs the police that Simon Saint had provided Crane with handlers. Crane captured them and used them to experiment with his Fear State “evolving” techniques. Batman already knew about these goons, though, and he followed them to the scene. Bruce dispatches the goons and takes Scarecrow into his custody to get him to the Asylum.

Batman acts unusually chatty and chipper compared to his usual brooding self. He permits Crane to wear his mask for some reason, and then he updates him on the status of all the bit players Tynion introduced this run. We start with Simon Saint and Miracle Molly. In order to free her comrades, Molly testified against Saint. She lives in Blackgate now, probably recruiting. Batman turned a blind eye to the Unsanity Collective for now, seeing them mostly as a force for good. Saint’s company shuttered the Magistrate, and Simon seems on the way to join the Suicide Squad. Waller and Saint: a match made in heaven.

Scarecrow and Batman briefly acknowledge the other Batman before moving onto Peacekeeper-01, Poison Ivy, Clown Hunter, and Ghost Maker. The issue ties off all the loose threads, leaving Ridley and Williamson to do as they wish. Batman delivers Scarecrow to the new asylum, Arkham Tower! Because what they really needed to do was put the asylum right in the middle of Gotham so it was more accessible.

Batman’s newfound optimism for Gotham City contrasts heavily with the grieving vigilante Tynion started with a couple of years ago. Considering Williamson plans on taking Bruce on a world tour, it makes sense Batman now feels like Gotham can handle itself. Honestly, considering Batman usually serves as the Justice League Wet Blanket, its nice to see him lighten up. Disaster always hits, but Gotham always survives. The Joker alone orchestrates a mass casualty event almost every other year. Batman acknowledging this feels over due.

Tynion’s writing feels different here with his swan song. He paints the Bat Family and Gotham as highly competent and capable. Almost like they have been dealing with these bozos for years! The issue purely exists as the epilogue of Tynion’s run, and honestly, that’s alright. The world of Gotham gets thoroughly set up for future writers. After all that, the characters return to the toy box.

Honestly, the art bugs me a bit. Because this is a big special one-shot, DC uses several different artists. To clarify, none of the styles fell flat, but they did not necessarily mix well, and the sudden style difference from page to page could be jarring. It felt like pages from many stories stapled together.

Verdict: Buy! But only if you have been following the series so far. I doubt any of the information dump is required info for the next run. If you have read the earlier stuff, or even if you fell off at some point, the one shot educates you on all of the characters’ end points for their perspective subplot arcs.