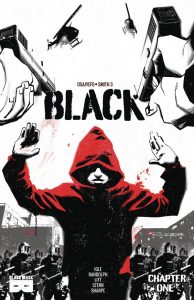 As comic readers, we look to our caped and cowled superheroes not only to provide us with an escape from the problems of our everyday lives but also to inspire us to be better people in a world that is, oftentimes, devoid of all decency. On a fairly regular basis we are being rocked by various tragedies involving African Americans and law enforcement officers, and that is the harsh real world space that Kwanza Osajyefo’s Black #1 occupies. But while the book finds its origins in our own tragic reality, Osajyefo makes a daring transition into the sanguine world of superheroics, crafting instead a new beginning for the book’s protagonist rather than an unfortunate end.

What’s actually most daring about this comic is that it does not dwell in racial tensions; if anything, the book is a simply a straightforward superhero origin tale that happens to feature a protagonist of color in a world in which only African Americans are getting super powers. Kareem Jenkins is that hero, and while his encounter with some overzealous police officers may be ripped straight from the headlines, the rest of his journey is ripped straight from decades of comics history. From the team of fellow-powered heroes that bring Kareem into the fold to the shadowy organization that wants Kareem’s newfound abilities for their own nefarious purposes, there’s a lot of familiarity in Osajyefo’s script. But for a book that is being brought to audience that has been historically underserved in superhero comics, what is familiar or standard? Black #1 creates a new standard, the way it ought to be.

Another bold choice is in the visually arresting grayscale art from Jamal Igle. His pencils produce some incredibly clean lines and an overload of emotional resonance with each expressive face, and the inks and tones provided by Robin Riggs and Sarah Stern add just enough atmosphere and depth to Igle’s artwork. It’s hard with such a skilled art team at the helm not to wish for a splash of color here and there, but the decision is one that absolutely works. There’s certainly something to be said about the book having no color, only superheroics.

Buy. On one hand, Black #1 is a surprisingly typical superhero origin story; on the other, it’s an important title to be putting out amidst such a heated race debacle. If you’re looking for a hero that represents a different culture and background, Black is definitely worth checking out.