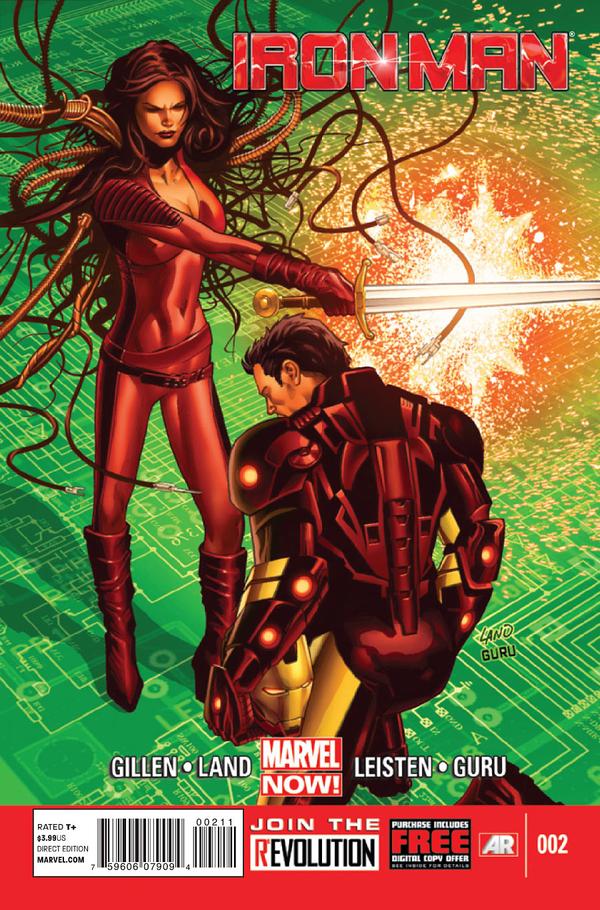 Though not perfect, Iron Man #1 was a good story for people not familiar with the adventures of Tony Stark. Gillen doesn’t hold your hand or bog down the writing trying to explain everything to you but he does a great job of letting newcomers ease into the story without a lot of struggle. I realize that for longtime fans of Iron Man, the story could come off as “been there done that” and feel cliched, but as someone who falls into the newcomer category, I found myself enjoying issue one as a jumping on point and was excited to see what issue two brought to the table. Having read issue two I can tell you that it’s better that the first one in almost every way, which should be good for those who were on the fence about the series after the first issue.

Iron Man is still on the hunt for the Extremis virus and is determined to stop it while also avenging the death of Maya Hansen. In the middle of tracking Extremis, he gets an invitation from “The Circle,” a modern day Knights of the Round Table located in Symkaria, also known as Latveria’s next door neighbor. Their leader “Arthur” (real name unknown) has challenged Stark to a battle with his knights, using the Extremis technology as well as parts built by “Merlin,” a former engineer humiliated by Iron Man. The battle for The Grail (Extremis) won’t be easy though, as these aren’t just regular guys in armor, but highly trained individuals determined to stop Iron Man in his tracks.

Issue two is a much more action packed experience, but it’s also ripe with dialogue, witty banter and all the sarcasm we’ve come to expect from Tony Stark. The Circle is an interesting group of individuals and, while they aren’t all fleshed out, all have their own little quirks  that make them unique. Merlin is obviously the most developed, given her history with Stark, and I really kind of felt bad for her after what happened. Chock that up to Gillen being good at his job. My big gripe with the writing though is the narration. From the time the battle starts to the end of the comic, it has an inner monologue going. At first it seems like Iron Man but soon becomes apparent that it’s somebody else. It’s not revealed till the end who that person is, so you’re left wondering for most of the second half where the monologue is coming from and why it adds anything to the comic. The only big blemish on an otherwise solid story.

Greg Land’s art is better, but that’s not really saying a whole lot. The backgrounds are colorful, suit designs of Iron Man and members of The Circle are all really cool looking and the action scenes are exciting to watch but that’s all I can really say positively about the art. Faces are his biggest Achilles heel and range from terrible to creepy. The uncanny valley nature of some of the faces are downright disturbing and really feel out of place. Others are either too simplistic or hard to discern from other characters. When we’re first introduced to Arthur he looks exactly like Tony Stark, save for maybe thicker facial hair. It’s distracting and feels cheap. If Land could focus more on the action (or at least in-suit work) or stay away from smiling (really far away), the art might become better, but it’s the really the biggest weakness of an otherwise solid comic.

Iron Man #2 improves on issue #1 in almost every way. It’s far from perfect and still hard to justify a buy for longtime fans, but I enjoyed it nevertheless. The story is solid, the new characters are interesting and besides a weird monologue during the second half, there’s nothing really wrong with it. The art is an improvement mostly in part due to the story having more action but is still far from good. I’m going to stick with Iron Man for a while as I’m interested to see where the story ends up, but it’s really up to the taste of the reader whether or not to buy this book.