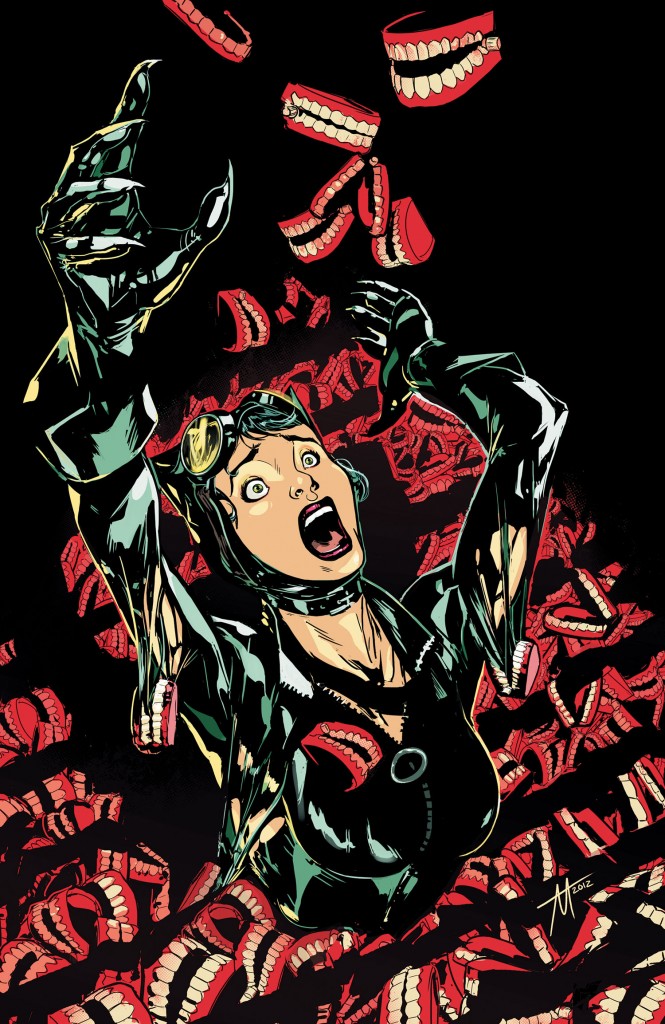 The Joker is out to tear down the entire Bat-family. Commissioner Gordon, Bruce, Babs, Damien…and Catwoman. Joker, claiming to know the identities of the Bat-family, knows the relationship between Batman and Catwoman. He knows what buttons to push, what threats to make, and he does everything he can to break Catwoman in this issue.

Joker starts off by proving to Catwoman that she isn’t the villain she thinks she is. His whole argument centers on Catwoman admitting that she is good, not bad. The orphaned boy she saves, her love for Gotham’s savior, her changing morals…all allow Joker to further torture and confuse Catwoman. Joker isn’t afraid to be a little unconventional in his manipulation of Catwoman. In addition to commenting on her relationship with Batman, he uses shame and physical torture to prompt Catwoman to act out.

His twisted theme park is his base of operation. Using a ride with centrifugal force, Joker amps up the power to tear Catwoman apart. I don’t quite understand how she can break chains off her wrists while being forced against a wall, but hey, it’s a comic book. I can accept it if it moves the story forward. Joker constantly tells Catwoman he is going to skin her, and he does so in many different ways. I understand the skinning of the cat theme, but some of the portrayals of the process are a little fan service. This is also coming from the woman who hasn’t read a Catwoman issue since the first one because of the extreme fan service (I don’t care much for unnecessary boobage and panty shots—unless it’s High School of the Dead…).

Overall, Joker is extremely frightening in this issue. I get a stronger sense of danger in this issue of Catwoman than I did in this month’s issue of Batgirl and Batman. It could be the proximity to the situation, the lack of knowledge I have about the relationship between Catwoman and the Joker, or just the fact that the Joker is so unpredictable. One more thing I want to mention: in Batgirl, there was a proposal. In Catwoman, Joker refers to Catwoman as his wife and kisses her. Coincidence, or just a way that Joker likes to make women feel uncomfortable and creeped out? I’ll let you decide.

Buy. It’s not a bad issue, and certainly more tolerable than the first issue that came out last year. If you’re following Death of the Family and are a little wary of Catwoman like I was, it’s gotten better. Still not my favorite female superhero series, but it’s worth giving a second shot starting with this issue.