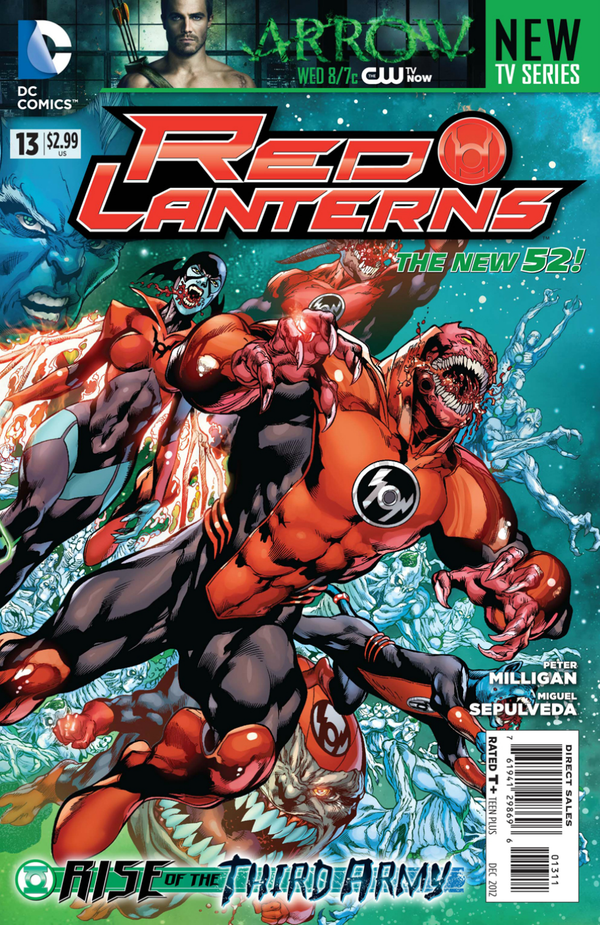 On the planet Arhtky, King Cord rules over everything with an iron fist. After decimating a village, he takes two women as trophies. One of the women, Taya, is especially liked by Cord, but she is abused and when her sister is killed she is filled with an unquenchable rage and thirst for vengeance. She escapes only to be found again. But before Cord can do any more damage, the Red Lanterns arrive. But they aren’t the only ones that arrive.

The story shows promise but suffers from a severe lack of proper development. Instead of focusing on Atrocitus, something I really enjoyed seeing, the story focuses on Taya and the planet of Arhtky. The problem is that neither Taya, Cord or Arhtky are developed very well. Taya, our protagonist, is filled with this rage and sadness about all that’s happened, but without any context of her life before or what she’s like as a person, it’s hard to care about her at all. Cord is a one-dimensional villain who isn’t given much to do except kill and smile creepily and Arhtky is devastated anyway so there’s no way to know what it was like before. The idea of The Third Army is cool and while the ending was abrupt, I’m at least slightly interested to see how this story turns out.

Miguel Sepulveda is back on art duties after Adrian Syaf took over for the zero issue and it’s essentially what we’ve come to know in terms of art for Red Lanterns. Grays, reds and browns are abundant and characters besides Atrocitus and his Lanterns tend to look pretty unremarkable. All of the new characters introduced in this issue, sans the Third Army, are bland in appearance and hard to differentiate from one another. The Third Army looks cool though and Sepulveda does a great job with their design. Since they seem to be the focus of the current story, I’m intrigued to see how the army is utilized in future issues and how it will look going against Atrocitus’s Corps.

Though the book shows promise and I’m intrigued to see how Atrocitus deals with The Third Army, overall it fell way short of my expectations. It”s intriguing to see someone besides Atrocitus be the main star of the book, but when they are barely given any time to develop as a character before the Lanterns come in and dominate, it’s hard to really care. On top of that you have spotty artwork, cheesy dialogue (even by this book’s standards) and it ends almost as soon as it begins. I can’t completely condemn the book, but it’s really hard to recommend.