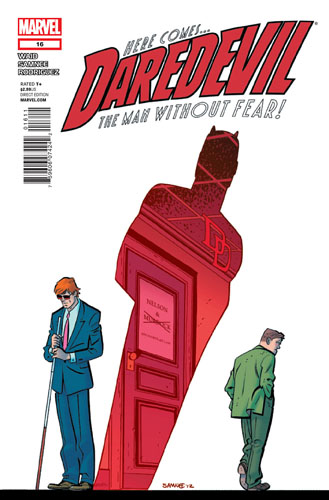 What’s in the box, Matt?

This issue puts together quite a few story lines from previous DD issues, so it’s a bit of a challenge to not spoil everything. As Matt Murdock, Foggy has a major crisis trying to figure out Matt; a topic that has been brewing practically since issue one of Mark Waid’s run of the title relating back to the events of, “Shadowland.” As Daredevil, Matt has just escaped being held in Latervia by Dr. Doom as a consequence of his actions from previous issues dealing with his run in with Mega Crime; i.e. A.I.M., HYDRA, Black Spectre and other super villain organizations. An even more interesting story that’s tied into this issue are the events of issues 9 and 10 featuring Matt’s battle with Mole Man. So reader beware, this issue is packed solid with a lot of information and not all of it will be clear to new readers, but for those who have been reading along all I can say is that all your burning questions will be answered.

On a more reader-friendly note, this issue does feature a nice juxtaposition between Hank Pym, otherwise known as Giant-Man or Ant-Man, and Matt Murdock during the resolution of the Latveria storyline. For those who aren’t too familiar with Hank, and have been wanting to figure out what the character is about for the Ant-Man movie announced at San Diego Comic-Con, this is a perfect character analysis. Bare in mind, it’s not a complete character history but you understand his character on a very deep level and ties in closely with Matt Murdock.

Buy it. For fans this book ties up a lot of stories and brings in a lot of closure to the mounting tensions from previous issues. For new readers this book might be confusing at some levels but the front-end story with Matt and Hank is truly masterful. I think that’s the great appeal for Waid’s run of DD, a front-end and back-end story at play with each issue that raises the level of enjoyment and complexity that rewards fans and entices new-readers.