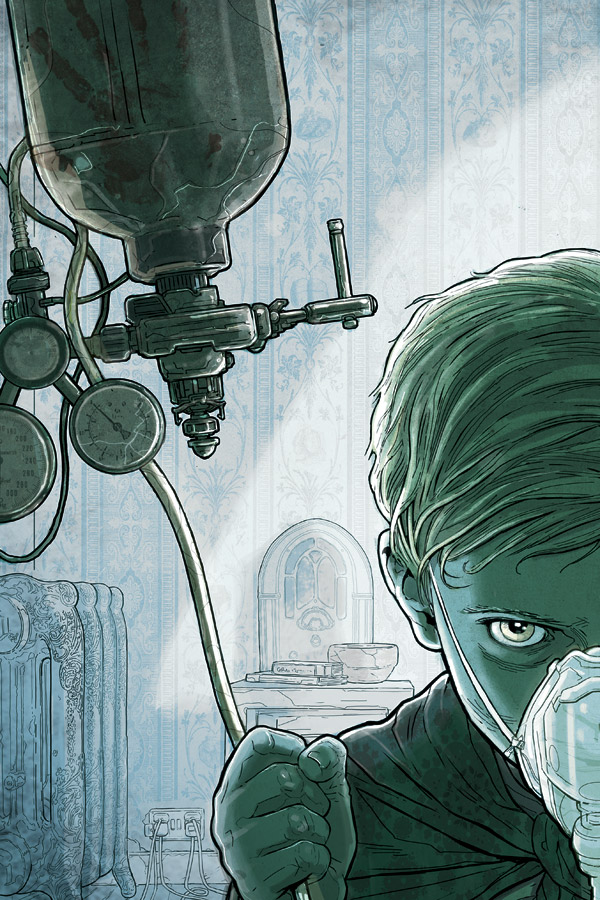 Ben really isn’t a very good doctor. He’s got a drinking and drug problem as well as a pension for paying whores with elicit drugs. He’s not exactly the kind of doctor you’d want to bring onto your surgical team. That is unless you’re involved in the selling of black market organs and are in desperate need of a surgeon that you feel you can manipulate to your every unethical whim.

That’s more or less the set up for Harvest #1, a gritty and bloody new book from Image Comics. Before writing this review I sat down to read Harvest #1 a total of three times and I kept coming to the same conclusion … I want more. By this I mean of course that I want another issue, but I also want more because I feel as if this first issue didn’t quite paint a clear picture of what we’re in for as readers. I spend a lot of money on comic books every week, a lot of us do, and as a result the books that we choose to purchase month in and month out had better be worth our hard earned cash. The level of satisfaction I got after a few reads of Harvest #1 I would to say was passable, but again, I want more.

I am fully aware that often times it takes a new story perhaps a bit more than one issue to find its bearings. But the most important thing about a first issue is giving the reader enough information or intrigue so that they feel that they have to come back for another. I know that I want to find out what’s going on with Harvest, but part of that desire is more out of obligation to bringing you all solid reviews than wanting to spend another $3.50 to see if Ben can get his shit together.

Not that it isn’t a good book, it is. I really like the filthy city and deplorable working conditions of the underground surgery center. Colin Lorimer‘s gritty art style is certainly well suited to the books contents and I do always enjoy a book with a fair amount of blood and glorious kill shots. My chief “complaint” about the book is the underlying “supernatural” elements that seem to be taking root inside of the story. Are we or are we not going to introduce some otherworldly elements into this story? Because so far I feel that that aspect of the book is not very well defined. If we are going to explore some of the more spectral side of death or the tragic ghostly residue that comes with botched surgeries than say so. Show me. One panel of something that may or may not be indicating this trend throughout the book is not enough for me. Again, I want more.

I think that if Harvest can manage to get a few of its elements together in the coming issues we will perhaps find that it’s a very solid book indeed. And who’s to say that with another issue or two that that won’t happen? Certainly not me.

The art is cool, the mood is enticing, but I might wait another issue or two to see if the book picks up steam or decides what it wants to be. I’m up for another issue but at $3.50 a pop I want something a little more solid to latch onto than just a gritty underbelly and some stylish art.