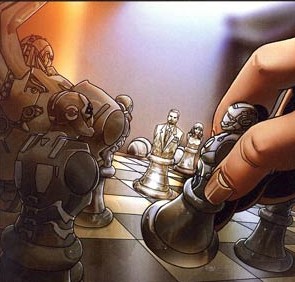 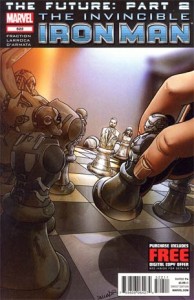 Tony Stark is working for The Mandarin.

With only 5 issues left before the Marvel NOW relaunch of, “Invincible Iron Man,” you can sense that Matt Fraction is going all in with his run of the title before going on to Fantastic Four. Thematically, there’s a lot of symbolism in the current arc, “The Future,” that reflects the origins of Iron Man and Tony Stark. Without giving too much away, you see Tony in a lot of similar positions doing similar actions that lead him to become Iron Man and you also see a lot of Iron Man viewed in a lot of same ways he was when he first began. I think this is a perfect way to usher in the final climatic issues of the run and I can’t wait to see Iron Man/Tony Stark, “go to war.”

The big highlight of this issue is an extra inclusion of The Mandarin’s backstory. We catch a, “good,” glimpse of this during Invincible Iron Man Annual #1 when The Mandarin takes a film maker hostage to film his life story. There’s a special little detail introduced in #522 that gives a whole new meaning to The Mandarin’s rings that might foreshadow his endgame for Tony Stark and the world.

We also have another interesting development on, “the home front,” with Pepper Potts and how we find her in #522. Thinking back on how she got to that point, I noted a dialogue within the, “Stark Resilient,” arc that sort of points to this development. It’s curious to see it coming about at this phase and it makes me curious to see what’s going to await Tony when he does return home; or if he does at all…

Buy it. Slowly I’ve been re-reading all of my, “Invincible Iron Man,” issues to refresh myself with this story to see how themes and characters have been brought up to this point. It’s worth noting that Fraction, Larroca and the rest of the creative team have all done such a consistent and well done story that it feels like you’re truly rewarded for sticking around till the very last page.