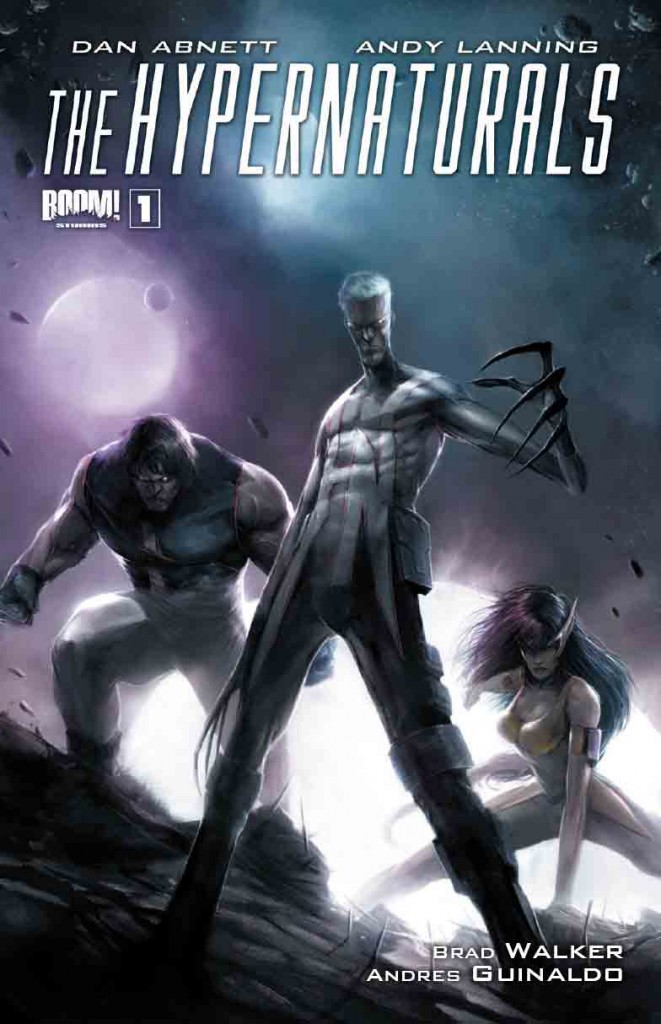 One of the big draws of any indie book is its ability to tell a personal story that could never exist in a big superhero book. Readers are often more forgiving of the flaws in these comics because they are trying something new. But, if you are asking people to travel outside the big 2 for a more traditional capes and cowls story, it’s vital to really bring your A game.  The Hypernaturals #1, a new superhero science fiction yarn from Dan Abnett and Andy Lanning, is a fun, but flawed tale that suffers from a slow start and its inability to bring anything new to the table.

The first hurdle to appreciating this issue comes on its first page, which is so full of information that it’s as if the writer’s are trying to explain the entire world in one fell swoop. Unfortunately, this leaves the reader more confused than comforted and ends up coloring one’s enjoyment of the book as a whole. There are times when info-dumps like this can be intriguing, but it becomes very clear, very quickly that Abnett and Lanning  would have been better served by integrating this exposition into the main narrative.

The opening crawl as it were consists of terms like “The Quantinuum” and “Nanocene Era” which, while confusing on their own, are contextually nothing more than fancy replacements for familiar terms like “galactic federation” and “Third Age.” It’s understandable that Abnett and Lanning would want to create a unique vision of the future, but it seems that inventiveness was saved for dense terminology instead of revolutionary story beats.

The ideas of government hired heroes, washed up veterans, and scared new recruits are not particularly novel, but thats not to say they can’t still be fun places to play.  Abnett and Lanning establish a nice tone, equal parts silly and serious, which is akin to that of a summer action film and it gives the book a charm that makes up for some, but not all, of its shortcomings.

The cast of characters are nothing more than archetypes, the newbie, the one with attitude, the genius and the veteran, and do nothing to draw us in a meaningful way. This would not be a problem if the world was intriguing, but it feels like many other sci universes we’ve seen before. So, the package ends up like an off brand X-Men book, and while there is nothing inherently wrong with that, if I wanted to read an X-book I would.

The Hypernaturals is not without hope though as Abnett and Lanning seem to have a few aces up their sleeve. Firstly, the mystery of what has happened to the active Hypernatural team has some nice potential, because it promises to intertwine with a big moment in this universe’s history. I’m always drawn in by big mythologies and how current events tie into past ones, so this possible development intrigues me. The other standout in the book is its villain, a genius by the name of Sublime. He has the kind of snarky intelligence that makes for a really entertaining antagonist and he, with the possible exception of the hero genius Thinkwell, is the only character I come away impressed by.

Wait and See – Even with its slow start and generic feeling world The Hypernaturals #1 is a pleasant reading experience. But, if this book has any hope of becoming a regular on anyone’s pull list, Dan Abnett and Andy Lanning need to transition it from charming distraction to fascinating yarn in quick order. Hypernaturals has a strong villain, an affable tone and a refreshingly colorful art style, but until we see where this space story is heading I would recommend taking a pass.

3 thoughts on “The Hypernaturals #1 Review”