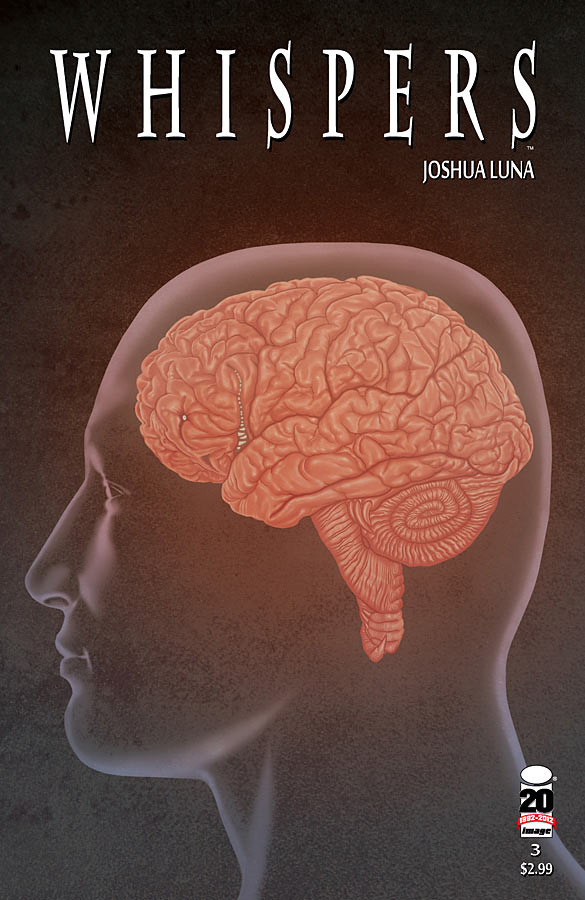 Anyone who listens to our weekly podcast is well aware that The Luna Brothers are my favorite comic book writers of all time. I identify with their books on a very personal level and have found no other team to be their equal. So needless to say I’ve been chomping at the bit with every Wednesday that has come and gone since the release of issue #2 of Whispers to get my paws on the next issue. There is no other book that I look forward to more other than Saga and Morning Glories which have since claimed my second and third most anticipated book slots.

For those who aren’t aware: Whispers is the story of Sam and his peculiar ability to leave his body each night that he sleeps. Floating about town like a ghost, Sam can hear the thoughts of those closest to him, as well as influence their thoughts. But when Sam begins to hear a demonic voice inside of his head this new found ability suddenly doesn’t seem to have as much appeal as he had first imagined.

Whispers #3 is what I like to refer to as an “exploratory” issue. By this I mean that now that we’ve established what Sam can do … just how deep does the rabbit hole go? What would you do if you were given the ability to modify the thoughts and actions of those closest to you? Would you be all noble about it and use your new talents for good? Or perhaps, eventually, curiosity would win out and you might want to see just how far you can push things? I personally don’t feel that anyone would be able to cope with what Sam is experiencing in this book.

Perhaps Joshua Luna‘s greatest talent is his ability to write characters that feel real. I know people like Sam, hell, I know several people like him. I’m kind of like him to an extent. And I’ve known girls like Vanessa and Cali as well (female characters from the series that play a major role in influencing Sam’s actions). Who is Sam to decide the fate of another human being? Yes, you could be looking to rearrange their lives for the beter out of compassion or mercy, but in the end it’s really none of your business, is it?

It’s questions like this and characters like Sam, Cali and Vanessa that make me crave every issue of Whispers. It’s always my favorite new book on the shelves and I urge anyone who can find the two previous issues (even if they are reprints) to do so and start reading. We all would love to think that we’d be the good guy if a situation like Sams fell into our hands. But in all honesty, it would only be a matter of time before the power we’d have over others would claim our moral compass for its own.

Whispers is my favorite new book on comic shelves today. They take a while to be released but when they are it’s never a disappointment. Buy it.