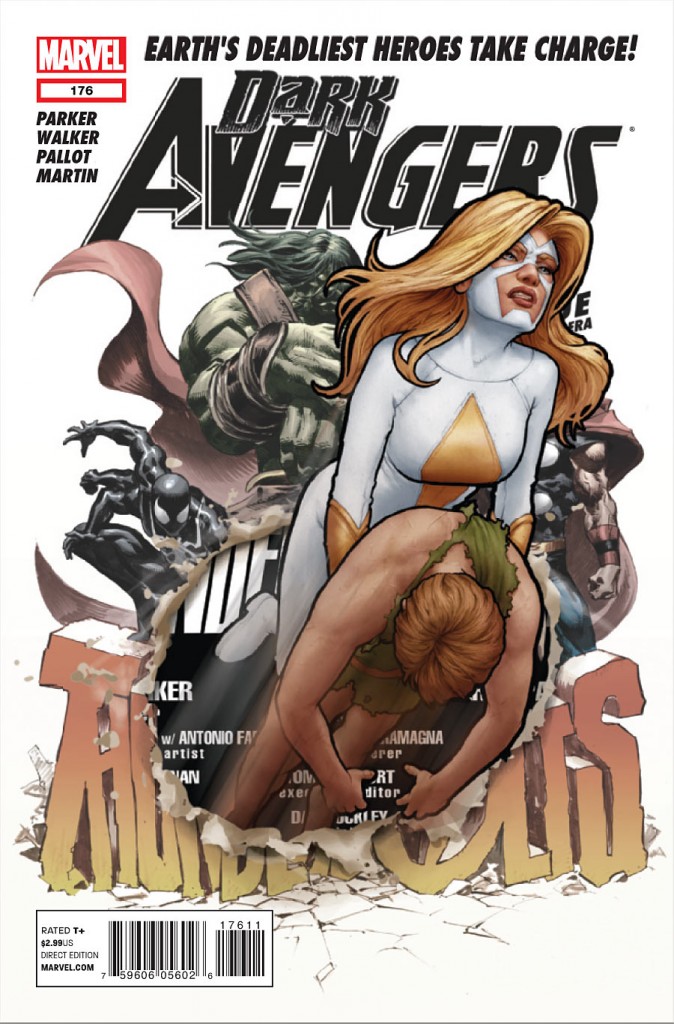 (with a T-bolts chaser!)

With Marvel having felled many stands of trees to get us to this point in their big Summer crossover event, we have all finally arrived at AvX #6—and thank the Flying Spaghetti monster for that! Frankly, I’m worn (and spent!) out by the whole thing, so I’ll leave the in-depth reviewing to my esteemed colleagues, and dive straight-away into the three Avenger-y books that I perused this week—sorry, no Avengers Academy for me please, I’m trying to cut back.

To begin, Secret Avengers #28 (S:Rick Remender; A:Renato Guedes) returns us to Hala, the Kree homeworld, and the Away team’s side mission to divert the Phoenix Force. It’s a well-done tale, showcasing heroism, friendship and courage, that serves to remind us what a great character Mar-Vell has been, as well as shining the spotlight on Carol Danvers and her burgeoning desire to be a force for positive change. My favorite line is from Mar-Vell—“I didn’t miss life”.

On to New Avengers #27, the latest installment of the “K’un Lun” history ret-con. This Brian Michael Bendis tale has had it’s moments, although they’ve been spread WAY too thinly for me, and this issue, as microcosm for the whole, is no exception. As a for instance, we have three pages of gorgeous  art by Mike Deodato of fiery Dragon & Phoenix images (did someone have bad Chinese food?), followed by a Leonardo DaVinci (if you don’t know, it’s too late now) quote: “What happened”? (I’m sorry, that was too snarky, even for me—I just couldn’t resist.) Actually, we do find out what happened, but you’ll have to find out for yourself. I must make mention of the final two pages, which might be the best, most endearing work that Mr. Bendis has ever produced, only slightly marred by a last-panel attempt at humor that comes off a little forced, and perhaps should have been left sans dialogue. All-in-all, New Avengers #27—thumbs up!

Next on “The Hit Parade” (ask your parents!): Taa-daa! It’s–AvX #6!! Now, I think the whole “Phoenix Force Five” reveal was O.K., but the plot is now treading onto familiar “Squadron”/”Watchmen” ground, so we can only hope that the various writers guide this into more foreign territory. For AvX #6, our shepherd is Jonathan Hickman, and from his pen there are some of the human, smaller moments that this rather pedantic series has been woefully lacking to date, so that’s a good thing. That we could see where this whole exercise was going right from the get-go,  ehhh, not so hot. As to an up/down, it’s a thumbs up—but does it matter? We’re all trapped on this ride, anyhow!

Now to an unqualified rave for Thunderbolts #176 (yes, I know it says Dark Avengers on the bloody cover, little Audrey, but I am simply too ornery to abide by this blatant money-grab!), a title that I was prepared to jettison, and that I am thrilled to be proven wrong about! This issue opens with us looking in on the “escaped-in-time” part of the team, now trapped in the Pleistocene Era, and a wonderfully funny homage to Kubrick’s “2001”. The by-now rather grumpy temporal nomads soon find that they’re not alone in being stuck, as they come across another time traveler, who might hold the key to getting home. Thunderbolts #176 (Ha!) is my favorite book of the week (although I’ve yet to read Next Men— I’m saving that one), and my electronic apologies to writer Jeff Parker and artist Kev Walker; I should have trusted you based on past performance!

VERDICT:  It was a pretty good week in “Avengers-land” as we wrap up Act I, but I have a feeling that it’s like Muhammad Ali in his “junk” bouts—he’d put on a boxing clinic for the last 30 seconds of a round to impress the judges and win the decision!

ADDENDUM: Due to my “Event Fatigue”, I found that as I was typing “This Week in the Avengers”, I was struck by how much I would have preferred to be writing about John Steed and Mrs. Emma Peel! I’ll get that chance soon—there’s a new mini-series on the horizon!