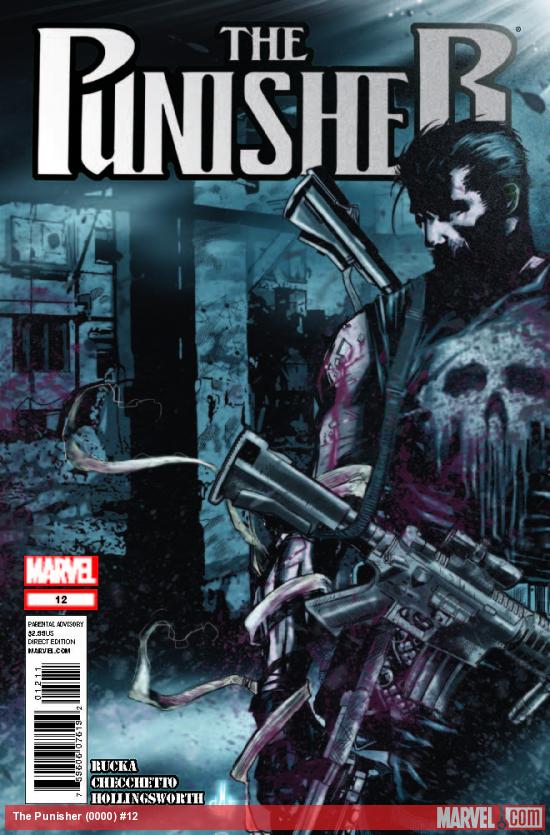 The team of Greg Rucka and Marco Checchetto have been doing a fantastic job with The Punisher so far. Treating Frank Castle like the mysterious enigma that he is and letting the supporting cast do most of the talking has been one of the best creative choices I’ve seen for the character in a long time. Allowing other characters besides Frank to develop and grow has been wonderful to see and when you mix that with Checchetto’s art, which is always incredible to look at, you’ve got the right ingredients to make an amazing comic book.

Following the events of the recent Omega Effect crossover, Frank is now left without a partner and Rachel Cole-Alves is on the run from both the police AND Frank. Rachel reaches out to Norah Winters, who has been helping her, directly or indirectly, since she decided to do something about the death of everyone she ever loved. While this is happening, Frank and Detective Clemons and Bolt have staked out Rachel’s apartment and are waiting for her to arrive. When Norah shows up in her stead to pick up Rachel’s wedding photo, Frank convinces Norah to have Rachel and him meet. It goes without saying that the meeting between the two of them doesn’t go smoothly.

Issue #12 differentiates itself from the past 11 issues by having something we haven’t seen: Frank talking for an extended amount of time. Rucka’s Castle has been a mostly silent character, only speaking when it’s absolutely necessary, but in this issue we see him go off on Rachel and explain to her what it means to really be a Punisher. Despite his uncharacteristically talkativeness, it all works in the context of  the scene and Frank still chooses his words carefully. It’s a powerful scene and works as a turning point for the character of Rachel, which is great because I’ve really grown to like her.

Checchetto returns to art duties this issue and he brings with him the amazingly detailed art that we have become accustomed to expect during his run of Punisher. That’s not to discount the guest artists who have stepped in periodically whenever Checchetto is busy, but his art fits Rucka’s tone and direction better than anybody else I’ve seen so far. His facials, character designs and backgrounds are brilliant, especially in this issue which utilizes rain to emphasize an intense, dialogue-free action sequence. Matt Hollingsworth, who did the colors this issue, also does a fantastic job. The comic is very heavy on blue, which works to emphasize the other colors (especially red and black), and what you’re left with is a beautiful comic that is as stylish as it is well written.

Greg Rucka’s run of The Punisher has been a must-buy since the beginning and issue #12 keeps that trend moving along nicely. From a visual or narrative standpoint you really can’t lose here. Checchetto’s artwork and Hollingsworth colors are a treat for the eyes and Rucka’s dialogue, especially his work with Frank this issue, is fantastic. Do yourself a favor and pick this book up. You won’t be sorry.