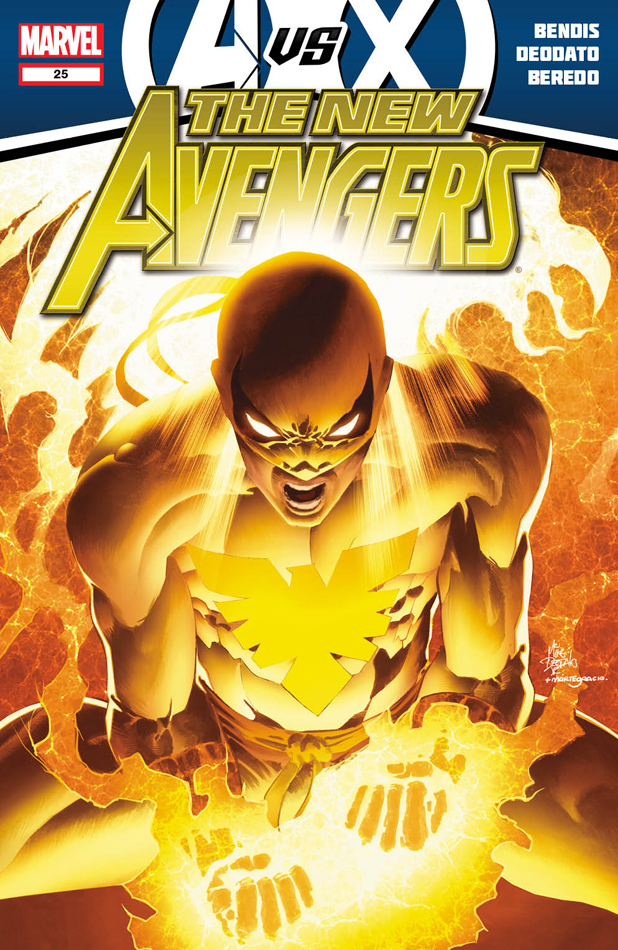 If you listen to the Talking Comics podcast from last week, you will hear an extremely varied reaction to Avengers Vs. X-Men #1. The critiques of the book ranged from disdain to satisfied enjoyment, but even I, who liked the book quite a bit agreed that the first issue was lacking in pathos. Cut to New Avengers #24 and its ability to bring a humanity and emotional involvement to the current interstellar event. In fact, New Avengers #24 has gotten me infinitely more excited for AVX #2 than AVX #1 did.

New Avengers #24 is one of the side stories in the current war of Marvel super teams, that runs in parallel to AVX#1. At the end of that issue Cap calls the Avengers to assemble, and in this book we get to see the story of one of those Avengers rushing to the super soldier’s side. The hero in question here is Luke Cage and the main plot is his strained relationship with his wife, Jennifer Jones.

Writer Brian Michael Bendis proves again that his true prowess as a storyteller comes, not from over the top histrionics, but earnest slice of life interactions. Last time out Bendis made us care about the android Vision and this time he does the same with the aforementioned Cage and Jones. There is a refreshing amount of complexity to the marriage of these two heroes, and their struggles about how to best raise a child in a violent world.

What I appreciate most is that Bendis treats this adult situation by writing both his leads as mature people. Both characters believe that their viewpoint is right, and yet they also believe in their partner. So, instead of irrational bickering you get the portrait of two people who hate that they have to argue and who understand that when a hard choice must be made, that support and not derision is the proper recourse. It’s the kind of relationship that shows big ideas in comic books don’t have to be relegated to galactic battles and time travel paradoxes.

If you are looking for a little more humanity in Avengers Vs. X-Men look no further than New Avengers #24. It’s often easy to lose your emotional connection to a universe beset by  cosmic forces, Red Hulks and mutant messiahs, but by crafting a story about parents struggling with raising a child, writer Brian Michael Bendis, has managed to connect us at a very real level.  New Avengers #24 is not only a great issue of New Avengers, but a fantastic side story in the Avengers Vs. X-Men event.