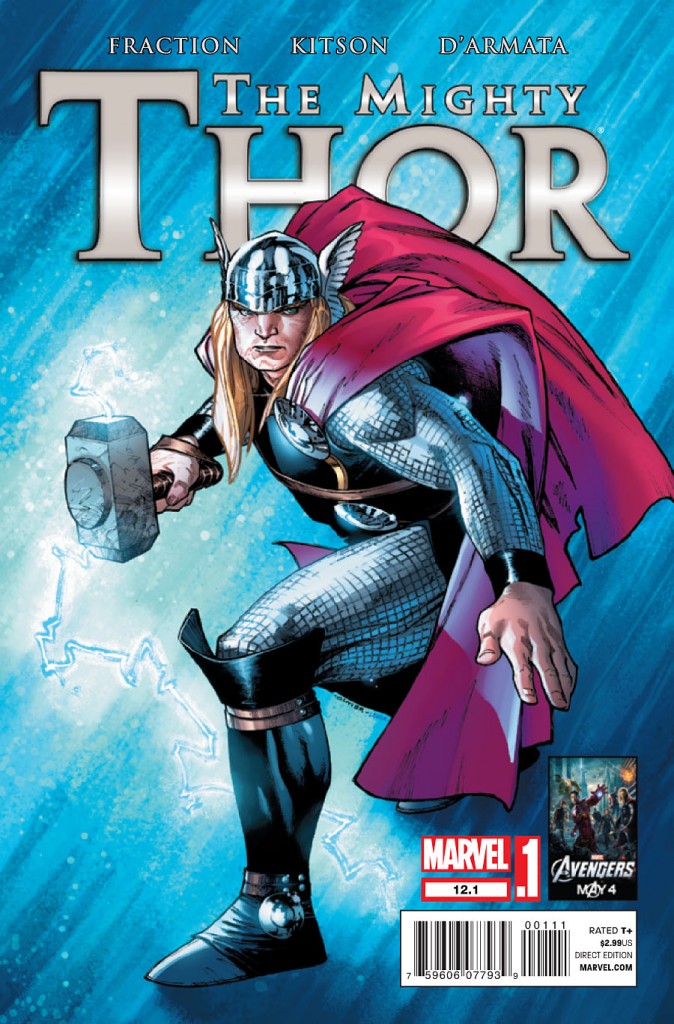 Since we began Talking Comics I have gotten to experience a lot of great comic book writers, but one who has alluded me this entire time is Matt Fraction. His two main Marvel properties, The Invincible Iron Man and The Mighty Thor, have seemed impenetrable to my newbie brain. That was until this week and the release of The Mighty Thor 12.1, a book that will probably give long time readers fits, but one that is perfect for a new reader to jump onto the series.

As part of Marvel’s .1 initiative, The Mighty Thor  is a book all about packing a wild amount of exposition into one issue of comic book storytelling. The narrative is framed by two of the warriors three, Sif and Volstagg, telling tales of Thor as they travel to stand by him in battle. There is some winking at the audience happening here as characters will often say things like, “bah like I need reminding that Thor is a good man” after a story is told, and this self awareness goes a long way in selling the events taking place on the page. Even as a new reader I could tell I was simply being told who the God of Thunder was, what happened in his recent past, and what might be in store for his future, but I was enjoying all the details so much I didn’t care. You see as someone who wants to jump into reading Thor on a monthly basis, this book has allowed me to forgo hundreds of dollars in back issues or worse, the reading a bland wikipedia page, in favor of one tightly written comic book penned by a fantastic writer. I’d call that a win in every sense of the word.

The Mighty Thor 12.1 might be a book about exposition, but that does not mean it is a dry piece of fiction. On the contrary, Fraction and penciler Barry Kitson fill the book with all of fantastical beasts and events you could hope to find in the realm of Asgard and beyond. In fact the book feels like a commercial you might see for a circus, “See the Mighty Thor battle hordes of demons!”, “See The God of Thunder infiltrate the palace of the Frost Giants dressed as a woman!”, “See the first son of Odin battling a towering Celestial”, and of course “See Thor and Loki in the midst of Shakespearian level family drama!” Okay, maybe that last one does not sound like a a carnival barker, but it does help to illuminate the more complicated aspects of Thor’s personality. (Oh yeah, and in case you didn’t know, Loki has been reincarnated as young boy who is now trying to be a hero not a villain.) It can feel a bit dense, and at times come close to the tenor of a history lesson, but as far as continuity catch up goes I think it’s well worth your time and money.

The Mighty Thor 12.1  is not going to be for everyone. It’s a book full of heavy exposition, which will most likely turn off long running readers, and conversely, engage newbies wanting to jump on the Thor bandwagon. Your enjoyment will also depend on how much you like fantasy in your comic books because this issue has it in spades. But, this is a great introduction to the current world of Thor and his brethren, so if you are looking for a place to start reading I’d say now is the time.