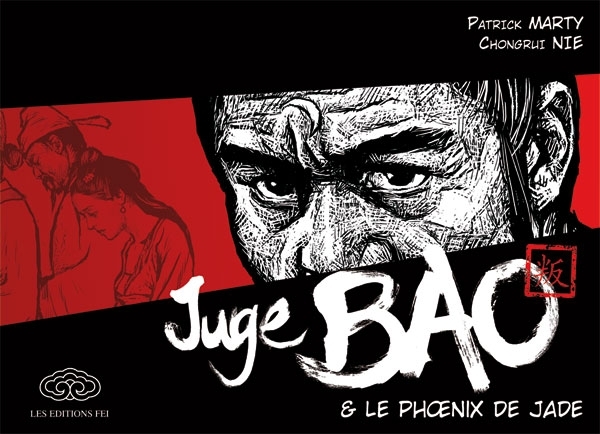 Originally published in France as “Judge Bao One: Le Phoenix de Jade”, Archaia Entertainment has brought this tale of China’s symbol of justice to our shores in a compact hardcover that promises to be the first in a series of releases that should gladden the hearts of collectors of Asian literature.

My ignorance of this apparently iconic character is profound. Thankfully, Archaia has provided a primer on the first few pages to bring you up to speed, and a quick bit of additional research gave me further illumination. Bao Zheng (999-1062) was a respected jurist during the Song Dynasty, and much revered in Chinese culture; his life and exploits forming the basis for many works of art, including plays, books, movies/TV and even operas! Who knew? (Well, Wikipedia did, but that would be telling tales out of school.)

Here, Judge Bao, trailing his usual retinue (including his own personal coroner!), acts as a sleuth in this tale of murder and real estate manipulation, much in the vein of films such as “The Detective” and “Chinatown”. After hearing a dying woman’s tale of woe regarding her imprisoned, but innocent son, the judge goes undercover as a beggar in an attempt to root out a corrupt judge. The infection runs much deeper, however, as the entire political infra-structure of the area is rife with opportunistic thugs willing to trade lives for gold.
Mr. Marty’s writing features crisp, interesting dialogue with some clever twists, and although the early mystery, to these Columbo-infused brain cells seemed rather transparent, the over-riding political intrigue was nicely done.

The art by Chongrui Nie would be more in Steve’s bailiwick than mine, but I’ll take a crack at an informed critique. The style is a sort of black and white pencilled pointillism, reminiscent of Drew and Josh Freidman’s stippling artwork of many years ago (see Trivia below). The fine linework lends an almost roto-scoped realism to the faces here, charging the images with vivid expressions and emotions—very interesting choice of artistic style, and also very well done.

VERDICT: If you’re a fan of mysteries or Chinese/Asian cinema, this could be just your taste. It’s a neat little book that deserves, but might not find, a wider audience.

TRIVIA: Drew & Josh Friedman worked for Mad, High Times and a bunch of other magazines, and their work formed the basis for such items as “The Ed Wood Players Trading Cards”, and numerous book-length collections of their strips highlighting “Old Jewish Comics”, “The Life of Joe Franklin”, “Dawn of the Duke” (John Wayne as a zombie!), “Tor on the Subway” and “The Attack of the 50-foot Stinky”.