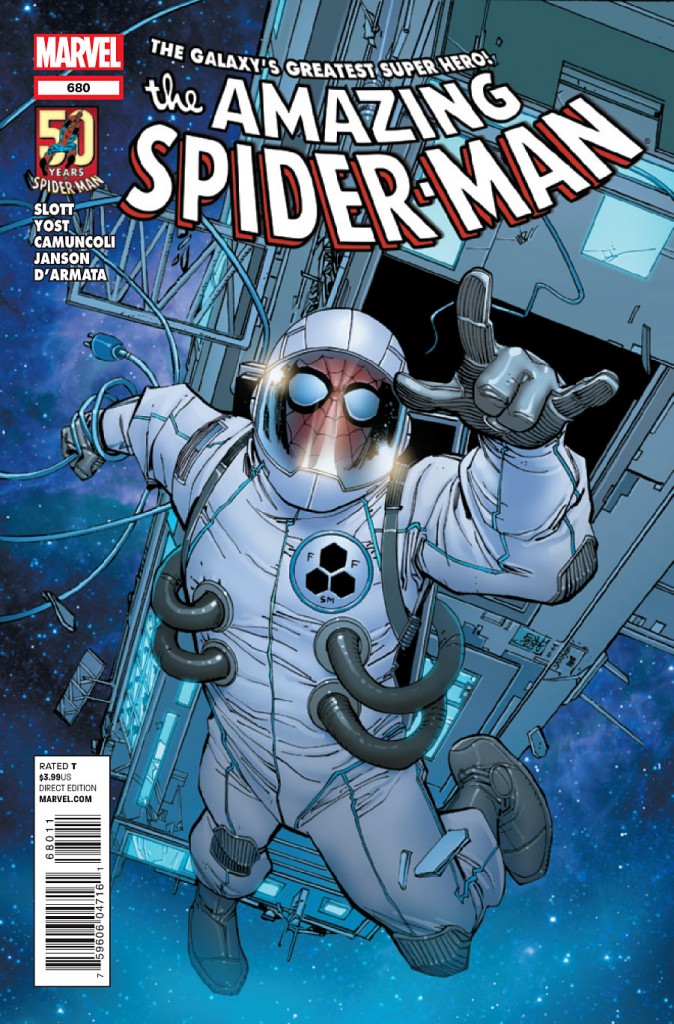 Let’s just go ahead and get this out of the way: the cover art for The Amazing Spider-Man #680 is a bit goofy. Though it fits the setting of this issue perfectly, there is just no way to make Spider-Man floating in a space suit look anything but silly. Fear not, though, fellow web-crawler fans. Inside this cheesy cover is a real gem of a story that should satisfy old and new readers alike.

Ever since the events of “Spider-Island,” The Amazing Spider-Man has been a series of short adventures, including a cross-over with Daredevil and a “point one” catch-up issue to help bring new readers aboard. Issue #680, however, begins paving the way toward Dan Slott’s next big arc: “Ends of the Earth.” Here we find Spider-Man being forced into action by an unknown “science-y emergency in space.” Mayor Jonah Jameson’s son, Colonel John Jameson, has suddenly lost the ability to communicate from the space station Apogee I and all systems are failing. Peter Parker, being the brilliant man he is, immediately recognizes a need for assistance and seeks out his sometimes teammates The Fantastic Four.

From the moment Spidey enters the Baxter Building, this issue becomes a series of non-stop laugh out loud moments. Dan Slott has really settled into a groove now and consistently portrays the wise-cracking superhero just as fans have come to expect. One thing that Dan Slott, and co-writer Chris Yost, do extremely well is include current pop-culture into their writing. This gives the reader a sense of ownership over the story and brings out the feeling that these characters really exist somewhere in our world today. The references to popular television shows like Dancing With the Stars and The Walking Dead, present-day sporting events, and music are fantastic and will bring many smiles to readers’ faces. The interaction that takes place between Spider-Man and Human Torch is the high point of this issue. With similarly sarcastic personalities, these two make a fun team to watch in action. The dialogue is so hilarious that any story-telling simplicities are easily overlooked because of how enjoyable the book is to read.

Giuseppe Camuncoli and Klaus Janson combine to provide some really wonderful art for this issue. Facial expressions are notably well done and Doctor Octopus has been re-designed with a monstrously sci-fi robotic look that lends the character an all new villainous appearance. One scene in particular is especially fantastic, not for anything particularly unique or special, but due to the hilarity of its depiction of Johnny Storm dancing in his underwear. Now if THAT doesn’t make you want to rush out and buy this book, I’m not sure what will.

Marvel does a wonderful job of catching readers up with their first page synopsis. Pretty much every important detail you need to know is covered in the dialogue, including that Johnny Storm has recently returned from death. Specifics aren’t important to this story and it can be enjoyed with no prior knowledge of The Amazing Spider-Man.