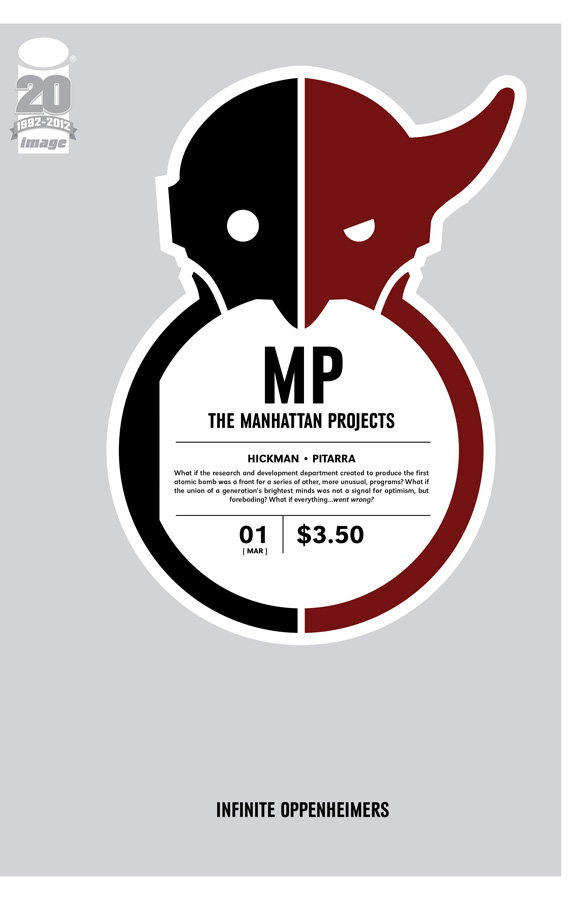 The Manhattan Projects is a tricky book. Or, at least it was for me. Doctor Julius Robert Oppenheimer was an American theoretical physicist and professor of physics at the University of California, Berkeley. His work inside the field of physics had aided in him creating the first atomic bomb, later to be detonated on July 16, 1945 in New Mexico. Hickman has chosen Oppenheimer, a very real and very dangerous figure in our nation’s history of being the bullies of the world, as his twisted title character for this militaristic sci-fi first issue of The Manhattan Projects.

I should probably come out of the gate stating that I really do not care for books with a majority of their story being based around military backdrops. I have nothing but respect for the military and how they protect my comic reading ass day in and day out, but I’m just not into the environment in which they reside. Anyway, it’s a good thing that this book also has a healthy dose of psychological and science fiction elements going for it, otherwise I would have most likely groaned till the very last page.

This first issue, like all others in a comic book arc, serves as our introduction to Oppenheimer himself. Throw in some grotesquely beefy military men, and the compound in which we’ll be tinkering with things that should never exist inside of nature, and you’ve got the makings for some impending supernatural events. Perhaps the most intriguing part of this book, was the relationship of Robert Oppenheimer and his (fictional) evil twin brother, Joseph. The relationship between Robert and Joesph was interesting enough to keep me reading, but I’m still looking for a whole lot more from the “action” portion of this title. There’s a moment in the story when a foreign object invades the Manhattan Projects compound, that rather than coming off as cool and stylistic, just felt cheesy and uninspired. If this is to be science-fiction, and you have one of the sickest minds mankind has ever known at your creative disposal, then let’s ramp up the danger factor a bit, huh?

In future issues I’d like to see more creative effort put towards the threats of the project itself, as well as a bit more depth to it’s characters. I don’t exactly want to read a book where only it’s title character is interesting and the other cast members are just kind of “there” to push the story along. I think perhaps a bit more personality, some more danger, and maybe even a bit of femininity would be in order to lighten up this sausage-fest?

The final page of the book left me with a bit of a smile draped across my lips but nothing more. If military and science fiction themes are your thing than you might want to give this a shot. I found that the characters were a little too rigid for my tastes and I’d found the art to be rather crude. I won’t be picking up another issue unless I hear that the book really starts to take off. I’m just being honest.