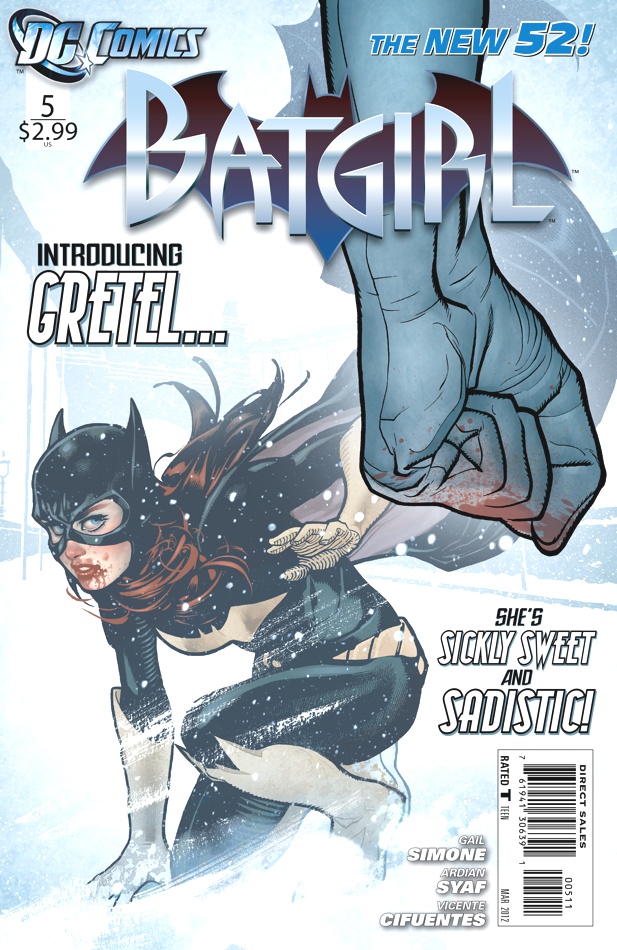 Title: A Candy Full of Spiders

Batgirl #5 marks the beginning of our second story arc since the return of Barbara Gordon’s in the DC New 52. After shattering the plans of Mirror, Batgirl is once again walking the streets of Gotham City hoping to help keep it safe from the many monsters that live there. Though, things take a turn for the bizarre when Batgirl, after thwarting a rather peculiar stick up on the Gotham bridge, is attacked by a new villain known to us only as Gretel. Barbara then happens to notice a pattern within the speech of both groups of her assailants, particularly the use of the numbers “338”, and it is with this that a new mystery begins.

I think perhaps my favorite part of the new Batgirl (besides the wonderful and wholly appropriate art of Arian Syaf) is the strong, quirky narrative of Barbara penned by Gail Simone. The mood of the book has always felt  right and I really do enjoy that at it’s core, Batgirl, is comic about a female superhero totally kicking ass and being comfortable within ones own skin. Though it’s too early to tell, I’m not quite sure how I feel about our new villain, Gretel. Thus far the threat of Gretel does not feel up to par with that of Mirror, but I suppose to compare the two would be foolish. The first issue of a new story arc is always a little tricky. The emotional ramifications of past events must carry over but the approach should be fresh and inventive. I’m not sure that we’ve had enough time with Gretel to really form any kind of opinion on her and in that respect the issue left me wanting  just a bit.

However, when considering that things are just getting started, it reminds me that we still have plenty of time to fall into this new adventure. I will be eagerly awaiting the next issue without a doubt.

Buy it – If you’re following the new adventures of Batgirl you’re going to obviously want to be in on the new story arc from the beginning. It might not blow you away but it certainly does look to be paving the road for yet another very good story.