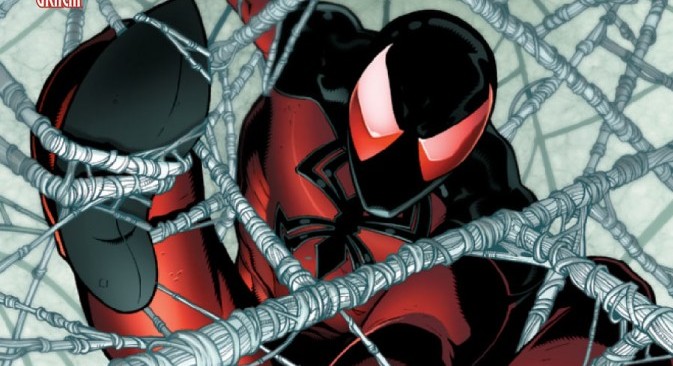 If you were a Spider-man fan in the 90’s you may have a myrid of emotions when recalling memories of the now infamous Clone Saga storyline.  Bewilderment, betrayal, disbelief and an overwhelming sense of  “Why is that superhero wearing a hoodie?”- itis.  That’s why I initially balked at the announcement of a new Scarlet Spider book.  I didn’t read Spider Island so I knew nothing of his more recent exploits and the tag line on the cover of the book “All of the Power. None of the Responsibility.” reeked of a “tough guy” approach I had no interest in.  Now, after completlting issue #1 of this new run, I sit here with a cliche running through my head.

Scarlet Spider #1 is an engaging action filled title with a surprisingly interesting lead character.  It’s well worth your time.

That interesting lead character is not original mask wearer Ben Reilly but the other Peter Parker clone Kaine.  I have little to no memory of his storyline but this book makes sure I don’t need to.  Scarlet Spider #1 is thankfully a true number one in every way.  Writer Christopher Yost does a fantastic job of weaving a voice over/ flashback scene that catches naive readers up on what they’ve missed. But this is more than just a exposition dump; It’s a compelling narrative. I found the story of this ill fated clone to be emotioinally moving in a way I did not expect. Kaine is a brute of a character with little social grace or even any real desire to be a hero.  It’s that reluctance though that makes him a damn fine one. I personally found his inner tug of war – which is slowly leading him down the path of the righteous- to be quite satisfying.  There is nothing wrong with an anti hero and Kaine fits that build to a tee.

Rarely, if ever, do I comment on the ancillary content in an issue but the amount of it in Scarlet Spider #1 is too rich to be ignored.  There is the Scarlet Letters (hehe) section that has an enlightening letter from Senior Editor Stephen Wacker but more importantly there is a four page appendix that catches you up on the entire history of the Spider.  Both of these additions help to enhance and widen your experience with the book and I highly recommend you check them out after your read.  This is all in service to one of the most complete narratives I’ve experienced since my return to comics. I love feeling like I’ve read an entire story at the end of an issue and this definitely has that feeling.   The art by Ryan Stegman, Michael Babinski and Marte Garcia manages to both harken back to and learn lessons from the 90’s origins of the character.  The muscles are big, the angles extreme and the gore intense but it’s tempered by a level of restraint that made the whole package work. Lastly, I  would like to applaud the creative team for setting this book in Houston.  I can’t tell you how nice it is to see a book outside of the usual Marvel stomping grounds.

Refreshingly very little.  The book throws you into the mix rather quickly but takes a compelling detour later on to catch you up on all you’ve missed.  I’d say anyone can pick this up cold and have a great time.  That is of course unless you don’t know who Spider-man is but….come on.

Buy It – Scarlet Spider #1  is a book that snuck up on me.  I picked it up fully expecting to not want issue two but came away stoked to see what is coming next. Unlike a lot of books it presents a fully delivered story that really left me feeling like I got my money’s worth. If you like your heroes anti and your violence a little bloody definitely give this a read.