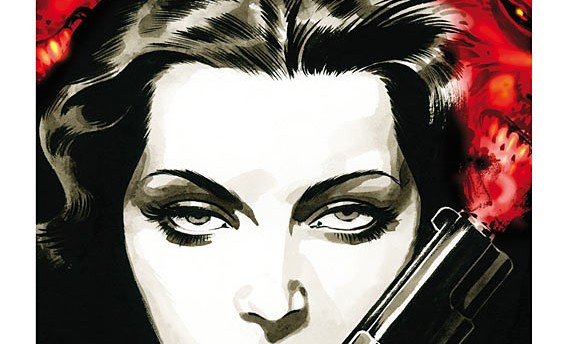 There is a curl of smoke from a long cigarette, a scratchy jazz record on the jukebox and a beautiful woman in a dress in every stroke and letter of Fatale. There is something quintessentially romantic about the noir narrative and it has beguiled the american consciousness for decades. Admittedly, it has fallen off in the mind of the mainstream but those of us obsessed with genre storytelling will always seek it out like a private eye chasing down a lead. It’s history in the world of comic books is vast but it’s most famous entry is probably Frank Miller’s Sin City. That book, like most of Miller’s work, was about masterfully bashing in conventions. Fatale #1, written by Ed Brubaker, is about doing something masterful within conventions and that makes it all the more impressive.

Fatale is a two pronged story. One is of Nicholas Lash, a reporter in 2012, who at the funeral for author and godfather Dominic Raines encounters Josephine. The alluring dame claims to be the granddaughter of a woman who had a romantic relationship with Mr. Raines but,like all great noir, everything is not what it seems. Later that evening Lash finds one of Dominic’s unpublished manuscript and the content of that book, set in the 1950’s, is the second part of our narrative.

It’s no surprise that Brubaker can make a noir story sing in the world of the novel but what is startling is how well it works into our modern society. Nicholas Lash fits the mold of the great hard boiled heroes and that gives him a timeless feel that’s rare in today’s disposable world. When we travel into the more noir friendly 50’s Brubaker manages keeps things interesting by incorporating tantalizing hints at something. It all serves to create a world that feels layered and vibrant. Fatale combines mainstream and genre so well that it’s comparable to an Alfred Hitchcock film.

The art by Sean Phillips evokes feelings of the great pulp art of decades gone by. Whether its a standard action scene or a page packed with eternal zombie soldiers; Its a style that, much like its dexterous narrative counterpart, feels at home in multiple scenarios. His work is the perfect compliment to Ed Brubaker’s consistently excellent writing. He has never gotten the press that Frank Miller, Brian Michael Bendis or Warren Ellis have been afforded but there are few writers who do it better.

VERDICT
Buy it – It is the perfect way to take a break from super hero books but still get a highly entertaining and accessible story.