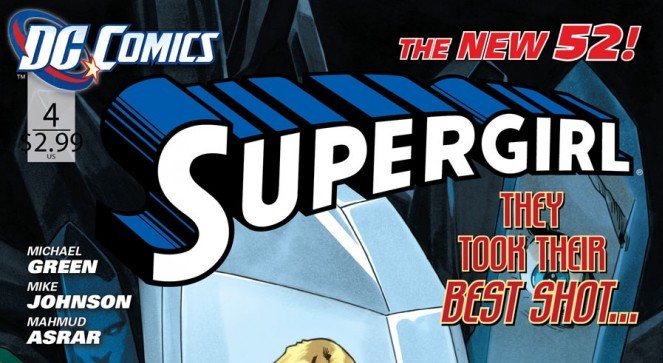 Kara Zor-el sits in captivity. Her prison guarded by the mother of all Kryptonian weakness; kryptonite. The evil scientists in the evil space station are looking to study our Supergirl and find out the secrets of her amazing abilities. All sounds like pretty standard hero stuff right? If you’ve ever read a comic book you expect Kara to make a spectacular escape and turn the tables on her would be oppressors. It’s so guaranteed that the cover even says it. But like the entire run of this New 52 Supergirl the greatness isn’t in the structure of the plot but in the character who lives with in its walls.

The creative team of Michael Green, Michael F. Johnson and Mahmud A. Asrar continue to craft our hero into someone who is so much more than just the female version of Superman. Their Supergirl is still the portrait of a young woman who is learning the ropes but she is evolving. She is no longer the angry little girl of issue #2 instead she is beginning to understand that the world may not be as black and white as she once believed. Most writers would have Kara learn valuable lessons about how powerful she is by having her endanger the lives of innocents but Green and Johnson aren’t most writers. They have instead chosen to have Supergirl learn her responsibility by the way she endangers her captors. Such a deft character move is the proof in the pudding that  Supergirl is a book to keep your eye on in 2012.

Buy It – What is there left to say about the DC New 52 reboot of Supergirl? I have already credited it with being the best true origin story of the books I am reading,  I’ve loved on it for it’s strong lead character and constantly drooled over it’s painterly art.