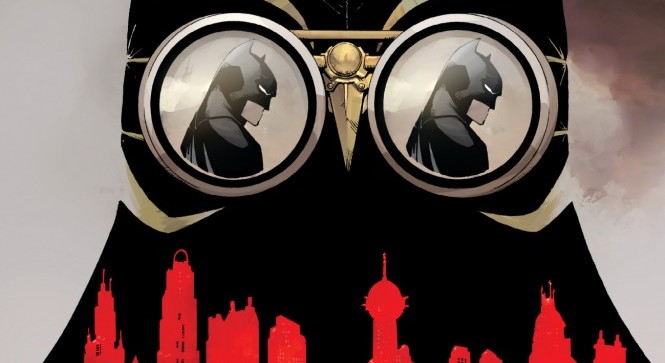 Up until this point Scott Snyder and Greg Capullo’s Batman has been a study in how to balance exciting action and intricate character portraits. Greg Capullo has been consistently afforded the opportunities to illustrate big set pieces and in those moments his panel layout has shined brightly. While Snyder gets to showcase his ability to write the Bat both in action mode and reflection mode.  Batman #4 takes a detour by putting Bruce in the Batcave investigating that pesky Court of Owls for most of the issue. This forces Snyder and Capullo to work without the safety net of high theatrics and I’m happy to report they pass with flying colors.

Where the book really takes flight (get it) is in Bruce’s highly stylized flashback sequence. The truly great thing about this foray into days gone by is that it sheds light on an often under seen aspect of Bruce’s past. We all know how his life was before his parents died and we know about the travels that led to him becoming the Dark Knight but what we rarely get in the interim. Snyder fills in that gap with the portrait of a damaged, lost and obsessed child. He can’t accept that randomness was to blame for his parent’s death. He singles out the Court of Owls and goes on what is essentially Batman’s first case to prove they exist. By inserting them into the most vulnerable part of Bruce’s past Scott Snyder has made his mythical menace an even more personal case for our caped crusader. We are used to seeing Batman obsessed with the idea that something is but I’ve never seen him obsessed with idea that something is not. This leads to the reader seeing that Wayne is too close to his own case and in turn leaves us with that delightful feeling of helplessness that only great writers can evoke.

In Justice League Jim Lee’s stellar art is always turned to 11 and it’s a style that transforms even dialogue scenes into kinetic craziness. This results in nothing being boring yet there is something to be said for an artist knowing when less is more. In Batman #4 Greg Capullo, who until now has been able to let loose at least once or twice a book, is asked to almost exclusively render static dialogue scenes. In Mr. Capullo’s hands the conversations feel alive. There is a nuance to his character’s facial expressions that adds new levels to Snyder’s writing. Then there is the aforementioned flashback which Capullo crafts to look like it’s shot on 70’s film stock. The panels have scratches, grain and a muted color pallet that reflects the fuzziness of memory.

There are always fears when a superhero book takes a break and slows things down. It can feel like a artificial time out from the story but Scott Snyder and Greg Capullo have avoided that trapping by making Batman #4 an essential look into Bruce’s past. This remains my favorite Batman thing in existence right now.

Buy It – Do I really even have to tell you anymore. The writing is phenomenal, the art is fantastic and it’s god damn Batman! P.S. The last page is f’ing awesome!