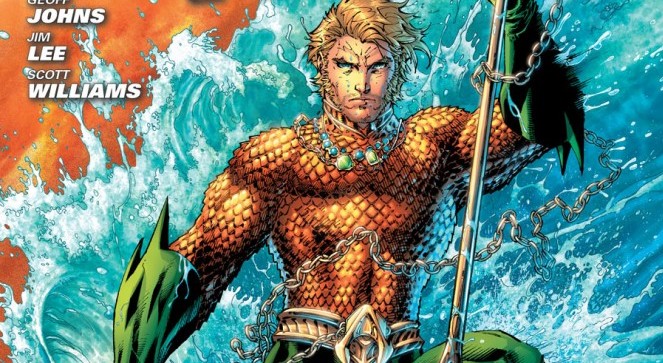 The marriage of two individually awesome entities into one creation can often times  produce wonderful results. Collaborations like Sorkin and Fincher, Christopher Nolan and Batman and the king of all combos peanut butter and chocolate have proven to be just what the doctor ordered. However there are those instances where seemingly great mash ups render sub par results. One only has to look at the recent DeNiro/Pacino vehicle Righteous Kill for evidence of the way things can go bad very quickly. Geoff Johns and Jim Lee are comic book all-stars and their combination on a Justice League book should have been a slam dunk. The unfortunate truth is that, while not a stinker like Righteous Kill, this tandem has produced disappointingly middling results.

Justice League #4  finds our heroes still battling the minions of Darkseid now with the aide of Aquaman. You might be thinking to yourself, “Hey Bobby that sounds an awful lot like issue #3 except then it was Wonder Woman and very similar to #2 except that was with Superman!”  Well, overly verbose reader, you would be correct. There’s a disappointing amount of repetition at play in this first Justice League arc and that lack of dynamic story telling is the book’s ultimate downfall. What Aquaman does to show off his power is cool but it’s a fleeting moment that loses resonance almost immediately. With the pedigree and production values at foot I know I’m supposed to like Justice League #4 but I just don’t. In fact I find it’s particular brand of character action to be expertly rendered but extremely vapid.

Jim Lee’s art is amazing in it’s kinetic craziness but he seems to be working without an off switch. Dialogue scenes are given the same flash as giant action beats and it has the effect of making neither feel special. Don’t misunderstand me nobody can illustrate action like Lee but this books feels like overkill. This goes hand in hand with the underwhelming writing of Geoff Johns. Mr. Johns may have his detractors but I don’t think anyone can seriously accuse him of being hackneyed. That’s why it’s shocking to me that in Justice League #4 everything in his plotting, pacing and structure feels like it’s by the numbers. The most egregious fault is, and I feel like a broken record, that each one of these issues has felt like sections of one big opening sequence and that is just not good enough when you are paying $3.99.

Skip It – The art remains strong but overwhelming, the writing feels safe and lifeless and to top it all off I didn’t experience any of the intended feeling of awe at the big reveal. I can’t believe I’m saying this but I’m officially labeling this book a disappointment.