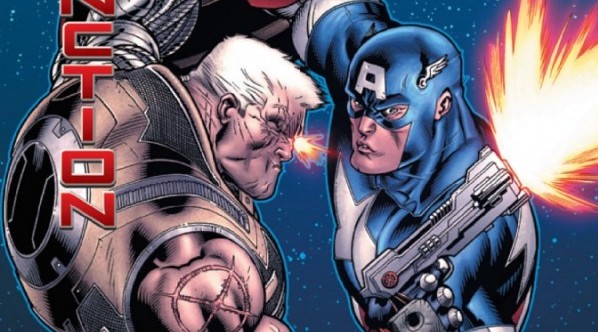 The comic book world has been buzzing since the announcement of the upcoming Avengers vs. X-Men event. That huge arc is set to really kick off in March of 2012 but that doesn’t mean Marvel isn’t all ready laying the groundwork for their biggest crossover in history right now. This particular piece of groundwork is called Avengers: The X-Sanction and it’s here to plant the seeds of discontent between the two factions. Written by comics legend Jeph Loeb the book tells the tale of time traveling mutant Cable as he continues to fight for the survival of his daughter Hope. There’s a lot to set up for March and yet there is the task of making this story seem just as immediate and important. The book manages to introduce some great characters but fails in its attempt to justify a purchase outside the merits of the upcoming super event.

Anyone familiar with Jeph Loeb at his best (Batman: Dark Victory, Batman: The Long Halloween) knows that he can strike a unique balance of utilizing classic superhero storytelling while still feeling completely modern. Avengers: The X-Sanction #1 retains that timeless prose especially in the interactions between Captain America and Cable. The two “heroes” have distinct voices from very different eras but shaped by Loeb feel like they are cut from the same cloth. I also love Cable’s “I’m a soldier” inner monologue that frames the issue. Also fascinating is the idea that a time traveler has a very limited time to achieve his goals. Whatever else you can say about the book there is no way to question the humanity at it’s core.

For all the good in the character work and plot set-up I have a lingering sense of disappointment in the book’s story. It’s greatest fault is that it feels like exactly what it is; a set up for something much bigger. I don’t like criticizing works of literature in any sort of meta way but it’s difficult not to see this the same way I see many video game or film tie ins. There are fine craftsmen behind these works but it always seems that the publisher’s intention is to grab more of your money before the main draw comes to town. This doesn’t mean that their won’t be worth to found in Avengers: The X-Sanction it just means I know when I’m done with it there will be no satisfying conclusion. On the other hand for someone who has been out of Marvel continuity for a while it may serve to get you reacclimated heading into Avengers vs. X-Men and that’s never a bad thing.

Marvel does a good job of telling you the pertinent information in the info page as well as the dialogue of the first few scenes. There is obviously a lot of history here but like most books if you find the basic character interactions understandable you will be fine.

Wait and See – There’s solid writing here but there is also a lingering sense of unimportance. I know that there is something bigger coming so aside from getting caught up on events in preparation for March’s Avengers Vs. X-Men the book doesn’t seem essential.