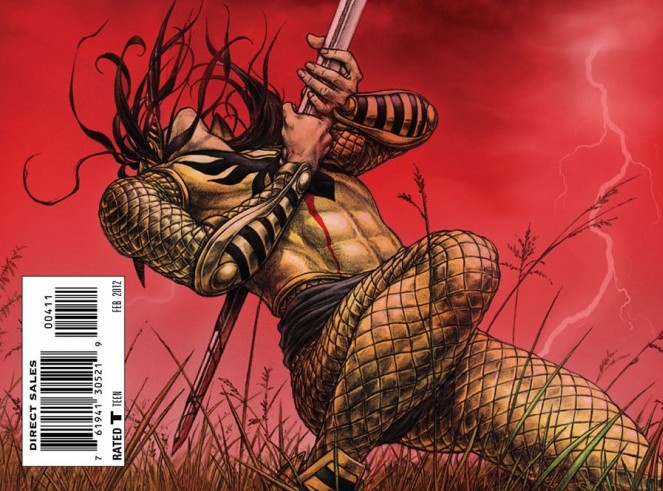 I worried last month that the very basis of the Demon Knights book might be flawed. I purported that maybe there were too many characters and too little time to really develop them all. That issue put me off so much that I picked up Demon Knights #4 with the idea that if it didn’t get better I would be giving it up. Thankfully, by choosing to focus on one character, Paul Cornell has done more than just return Demon Knights to it’s initial sense of fun; he has managed to make the personal story just as interesting as the bombastic battles.

The cover of Demon Knights #4 promises “the secret origin of the Shining Knight” and for once the cover isn’t lying. The bulk of the narrative is told through a flashback/supernatural vision that our brave knight has when she passes out before the big battle. There are a lot of revelations in this vision but the really important thing is that it makes the Shining Knight just as intrigal to the narrative as Jason Blood.

It’s a tricky proposition making larger than life characters relatable. Up until now each warrior has been likable in a mythological sense but not really in an emotional sense. In the Shining Knight’s origin story we not only see the valor of an immortal warrior we also see the soul. There is one quiet emotional moment in particular that, even more than fierce battles, showcases how brave this character is. Furthermore writer Paul Cornell deftly weaves the beginnings of our brave squire’s quest for the Holy Grail while still setting up an incredibly interesting narrative for future issues.

But don’t think just because the story takes a foray into character development that it also does not deliver on the things Demon Knights is meant to. There’s still a huge fantasy tapestry being weaved here and it’s full of blood, guts and bizarre humor. The issue even manages to call into question the meaning of the very title of the book which may seem confusing but hey a little bit of mystery never hurt anyone!

Buy It – It retains the over the top fantasy of the excellent first two issues while for the first time really giving you a character and mission to latch onto. The Shining Knight comes out of this book looking like she/he could be a genuinely great character. Also how about that cliffhanger!