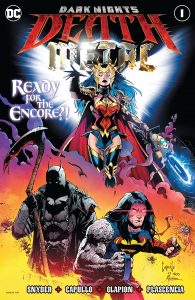 DC has an obsession with Crisis on Infinite Earths. Ever since their groundbreaking and world destroying maxi-series hit the stands in 1985 they have been obsessed with replicating and pigeonholing everything that has come since Crisis into another Crisis moment. This obsession has grown in recent years, which isn’t a surprise as many of the current DC writers are my contemporaries in age and everyone who was young and reading comics when Crisis hit see it as a guidepost in their comic lives as it spawned the event comic craze. Yet DC cannot let it go either and they continue to let their writers play with the Crisis motif again and again, sometimes at the same time and in direct conflict with one another which leads to what can only be described as a continuity nightmare. Enter DC’s latest back door entry into theCrisis library, Dark Nights: Death Metal.

Dark Nights: Death Metal #1 begins the sequel to 2017’s Dark Night: Metal, wherein Batman discovered the Dark Multiverse and led the DC heroes into direct conflict with the Dark God Barbatos and his seven evil versions of Batman, led by the now hyper popular Batman Who Laughs, and evil combination of the Batman and the Joker. Dark Nights:Death Metal #1 also serves as a sequel to both Dark Nights: Metal as well as Scott Snyder’s confusing run on Justice League.  Snyder’s Justice League run saw the destruction of the Source Wall and the release of Perpetua, mother of the Multiverse and creator of the Monitor and the Anti-Monitor, the two core architects of the original Crisis on Infinite Earths. For the most part I enjoyed Snyder’s run on Justice League, especially the Sixth Dimension storyline but the ending was a bit muddled as the League lost, as Perpetua is fueled by the worlds of the Dark Multiverse, where the Crisis’s of the DC Universe continue forever, and reduces the DC Multiverse from 52 to 8. The issue I have is that the end of Snyder’s Justice League should have led directly into Dark Nights: Death Metal #1 as it is the direct continuation. Instead DC left the plot hole hanging and brought in a new creative team and just continued the Justice League as if nothing happened until months later when we are no expected to jump into Dark Nights: Death Metal. Now with the current state of world affairs and the Covid crisis it would be easy for the end of the Justice League and the beginning of Death Metal to be a bit jarring, yet the gaps in publishing and continuity predate the pandemic and publishing issues that ensued. Also, during and in the wake of Dark Nights: Metal DC also rolled out Doomsday Clock, which was its own Crisis of sorts that tried, by using the Watchmen universe to explain the DC Multiverse and all of the recent dark changes to the world(s). So now we have a conundrum of Crisis’s, a logger jam in conflict with one another. Plus, there was Heroes in Crisis and, in my humble opinion, complete and utter mistreatment of Wally West and don’t get me started on the contents of Flash Forward and the narrative leaps that DC took to make Wally West their new Doctor Manhattan. To use a comparison, much like their comic distribution the current state of the DC universe is a F#$*^#g mess!

So, it falls to Scott Snyder to clean up this mess. What may have begun as a narrative follow up to Dark Nights: Metal it’s safe to say after reading the first issue that Dark Nights: Death Metal that this event mini-series also intends to clean up the entire Crisis mess DC currently finds itself in. Death Metal is a fitting title to this series as is the ‘Heavy Metal’ motif as the current state of the DC Universe looks to be in line with the themes heavily present in Heavy Metal and its sub-genre Death Metal music. As the story opens Perpetua has won, she has forsaken her disciple Lex Luthor in favor of the Batman Who Laughs. The Batman Who Laughs has assembled his own group of Dark Knights, Batmen who patrol this new Universe to make sure that the heroes of the DC universe stay in line. Many of the world’s heroes and villains who have not fallen in line with Perpetua and her servants are imprisoned off-world or in some special cases in the pits of Tartarus beneath Paradise Island. Not every hero has taken to this new status quo. Batman has taken possession of a Black Power ring last seen in Blackest Night. While Batman has embraced the power of death Wonder Woman, along with Swamp Thing (with a look more reminiscent of Eddie from Iron Maiden fame then the Green Elemental we are used to) look to a new prisoner with a connection to the powers of Doctor Manhattan and the former Crisis on how they may be able to restore the world to its former glory and end the reign of Perpetua.

There was a lot going on in Dark Nights: Death Metal #1 but to be fair there is a lot of context that needs to be relayed to the reader. Snyder tries to both engage the reader in this new story but also to make sure that readers not current with the DC Universe know the lay of the land. Luckily Snyder is joined by his longtime collaborator Greg Capullo, whose strong artwork helps to draw the reader in even with text heavy dialogue that helps establish what is going on. Snyder’s horror roots and Capullo’s admiration for elements of Heavy Metal Music lore really creates a creepy horror aesthetic within this series that fits perfectly with the theme of this latest DC event. Snyder and Capullo have been a dynamite creative pairing ever since their landmark run on Batman during the New 52. I was a fan of what they did within that title and if anyone can right the current state of the DC Crisis catastrophe it’s these two A list creators. Plus if the rest of the mini-series is going to look this creepily cool I can’t wait to see what comes next in Dark Nights: Death Metal.

Verdict: While the current status of the DC universe is a bit of a continuity mess it feels like the creepily cool Dark Nights: Death Metal may be the event to right the ship and if the first issue is any indication it is a Buy.