In a world of Pandemics and turmoil, one hero strives to rise in their kitty condo above the Joker 80th Anniversary and Death Metal: Rascal! Rascal follows the eponymous kitten after it is found in the mail by the narrator. The cat miraculously survived its time in its package. Her mom needs arrested for mailing a cat like that, but whatever.

What follows is a graphic novel, short on story and plot, but long haired when it comes to cute. The kitten slowly makes itself at home. The narrator gains his trust and affection, though hesitant at first to take the responsibility. The cat adapts to its new home. Sometimes, the owner manages to teach the cat something. Mostly though, Rascal trains his new owner. He rules the house like Garfield, sans the dialogue, thought bubbles, and over the top schemes. Rascal keeps it realistic, by keeping the sentience to the narrator. Outside of some phone calls for dialogue, only the narrator and the cat exist in this world. While other comics and cartoons keep a full cast, Rascal has only the duo. This hurts the book. 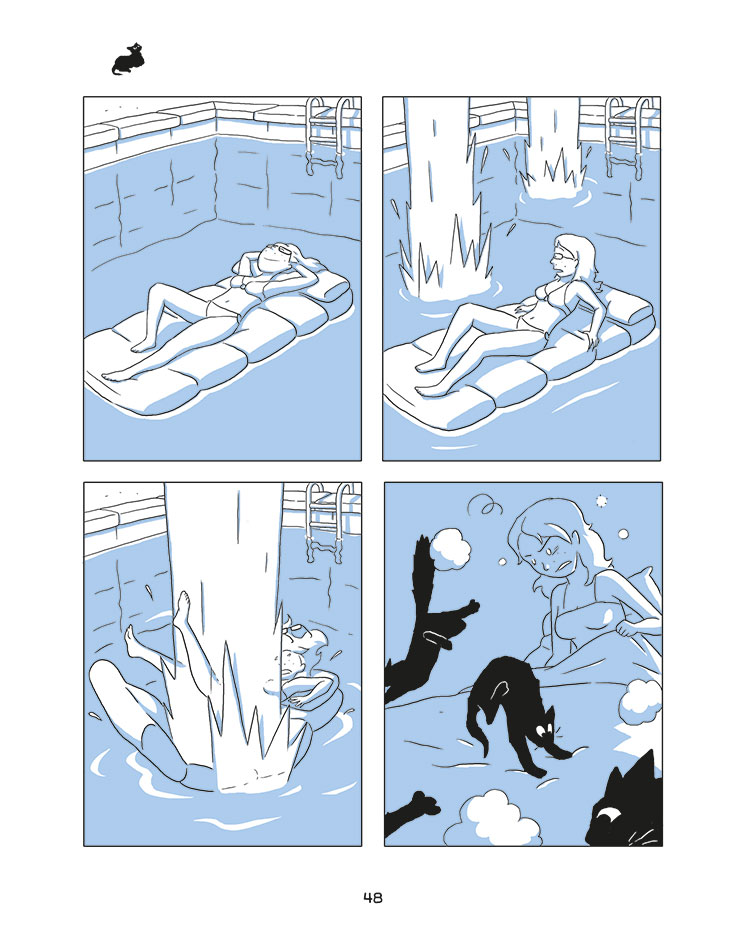 The book never feels like a graphic novel. Each page serves as a singular cartoon strip. While the two do settle into their new found roles, there is no real conflict. Little character growth occurs. The book even lacks truly funny strips. Instead, the book relies on quiet introspection of cat lovers and their fur children. While the pages ring true, they merely give the reader a simple dose of cute. The story never packs any emotional punches, but serves as a long promo for cat ownership.

The writing feels more like reading a daily calendar of cat cartoons. No plot or twists, just small smiles. The art serves nicely. The color scheme of blue and white makes the black cat pop on the page. The cat retains its cuteness through the book. The color scheme starts to bore after awhile, and in a book so dependent on art over story, this hurts the book greatly. More detailed art might have survived better, but by the end of the book, I was bored. The lack of story progression made the endless strips feel pointless.

Verict: Pass. While I didn’t hate the story, the tale left little impact on me. There just isn’t enough there for the price tag of a graphic novel. A standard one shot may have been better choice.